Hello new here and in need of Help (of coarse)

So I have this Honcam arcade stick ps3 pc ps2 that i’ve had collecting dust on my shelf and would like to use it only cant locate it on my computer,Any ideas on locations for drivers?I miss playing my fight games and am currently using windows 10.
Any help would be appreciated.
d^.^b

Well, I don’t know much about this, and I really was hoping someone more knowledgeable than me could get to you on this, but I hate to leave you hanging so I’ll try and do the best I can with what I’ve got.

I’m assuming this is your fightstick right? 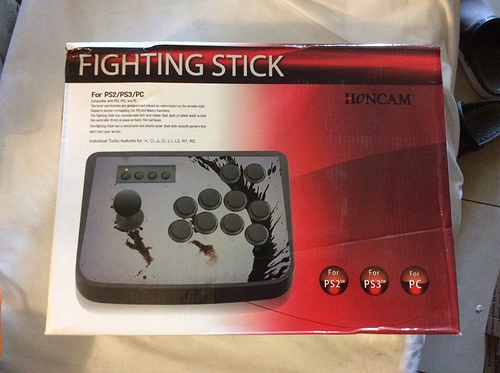 I don’t own one, I just found that picture off an ebay listing.

When I tried to do an internet search of device drivers to get it to work on PC, I couldn’t find anything for your device at all.

That said, maybe you should try to download the 360 controller device drivers instead or Xbox One controller device drivers, and then use them to install with your device instead. I did this with my Xbox 360 TE fightstick long ago. There was no software to get it to work on the PC at the time, but there were to use Xbox 360 controllers on PC. Someone on the Shoryuken forums then told me you can use the 360 device drivers sometimes to get it to work, if you designate it on your device list to install using them instead of searching for them and finding nothing. Worked and it got my 360 fightstick to begin working on the PC.

I hope that helps. Probably not the greatest solution, but it’s the best I’ve got, unless someone who knows better than me can come along and direct you on that.

I may try this only I’m concerned that since it’s for ps2 ps3 and pc that it might jumble it abit button wise or not register at all but then again wasn’t working prior so ill give it a try.

Well, given that KI allows you to remap the buttons, once you get them to work, getting them mapped to the correct button bindings should be fairly easy, with a little trial and error.

I know I may be a bit bother some to ask but could I possibly get a link for this driver download you speak of?

I know that link looks like its trying to sell you a controller, but somewhere in the middle of the page, there should be a spot that will say “Downloads” with a device driver menu, and it will have a slider, choose the correct version you need (Windows 10, 7, etc.).

Then this one is for Xbox One controllers: If that isn’t the exact one you need, there is a tab on that page that says “related drivers”. Try searching that list if this one doesn’t work either.