Well, I didn’t win a Cinder color 10 on twitter, and I’m not sure when (or if) it will ever come out, so I decided to make this in the hopes of keeping the dream alive. I don’t have any fancy digital graphics setups, so I just used older, traditional media to make it. Someday, I’d like to get a nice tablet or something to do more professional stuff with, but until that day, I’ll stick to good old fashioned Sharpie Pen, Marker, colored pencils, and mechanical pencil for the time being. 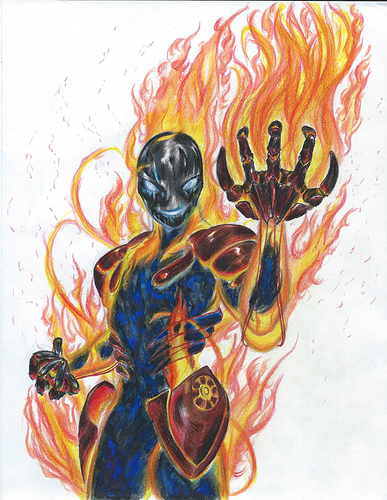 On a critique note, I think I rushed the flames and they came out a little too cartoony.

Neato and very cool too

The circular flames are a nice, overlooked, touch. Not many people notice those. Although I think his hand looks kinda SF sized, and his wrist isn’t THAT skinny. I dunno if that looks right to me. Still looks good though.

Really nice, love the shading on the face, torso and shoulder armor, didn’t I read somewhere that Cinder has six fingers on each hand, though? Or have I dreamt that? Either way, this is really neat.

I was trying to go for a perspective thing where it got a little larger as it was closer to the camera, but I may have messed that up too.

Also, the scan brightened the picture a bit, so some of my blending seems less blended now.