Half Life 3 is officially dead

When the chief writer puts the entire potential plot on a blog post, I think we can officially say it…

This file has been truncated. show original

FINALLY!
So glad this can be put to rest so people can move on.

Man, what the heck happened to this series? They made nothing but critically acclaimed installments only to leave it all hanging part-way through. What went so wrong that they couldn’t finish what they started?

Not gonna lie that was kind of…

Actually, I got more of a

“Freeman’s story is over, but there are other characters” vibe.

Half Life never really impressed me all that much.

As far as what happened - valve stopped making games. That’s pretty much the story. I’m sure there was an intention to make it at some point but after even a few years the hype became so ridiculous that anything they might have done would have been a disappointment.

No… This does not confirm anything. Marc Laidlaw (the person who wrote this) does not work for Valve anymore. This story was originally some weird gender swapped version of a hypothetical Half-Life 3 ending. The version of the story that was shown here is called “Epistle 3 Corrected,” and it replaces the gender swap clones with the characters from the games. It is essentially just fanfiction that just happened have been made by a former Valve employee. Here are Marc’s Tweets. 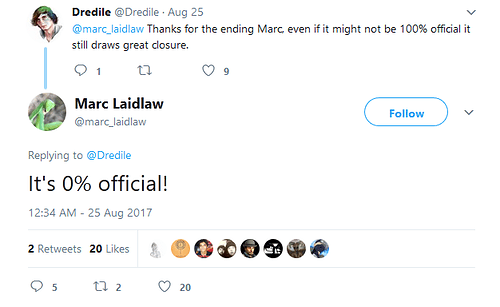 So this is not an actual conclusion to the Half-Life storyline. Even though this still does not confirm that Half-Life 3 will never happen, I feel that is very very unlikely that it will happen.

By the way, I learned most of this information from some articles I read. And please correct me if I am wrong on anything.

Canon or not, he gave the fans the conclusion Valve will most likely never do.

I feel the same way. I loved the original HL. I was blown away by the story and the flexibility of the engine (lots of Counter-Strike and other mods were played by myself).

HL2 was a good game and had impressive physics but I didn’t really find myself being wowed like I was with the first game. I’m happy it enjoyed the success it did but I’m not losing any sleep over no HL3 being made.

I started the series with HL2 and thought was a masterpiece for its time despite some sections that dragged on too long, and the additional episodes were even better. I tried the original but it couldn’t hold my attention. Maybe they’re the kind of games that don’t hold up super well, though.

I just wanted HL3 to see the story concluded. It just feels wrong and irresponsible to leave it all unfinished like this.