DISCLAIMER: This Thread isnt about all things Guilty Gear Strive (GGS)… I just wanted to go over few things that are new and different. If anyone wants to make an Official Thread then that would be great

But I hear not everybody is on board with all the changes… and If I could sum it up in just one Sentence its: GGS has removed a certain amount of Complexity from the previous game. Classic !!! Its an issue that comes up as Fighting Games get more popular and Honestly thats all I want to say about it… I’ve been in enough Debates… I’m tired… so… Moving On.

Reserved For My Opinion… 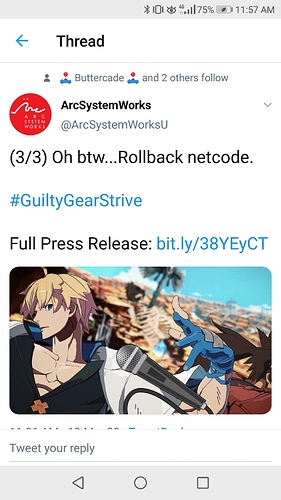 Zinac (one of the guys who worked on KI) is also apparently a part of the ASW team, so I’m pretty hopeful their implementation will actually be really good! Shout outs to him and all the others within the team who pushed for this!

Smart of them to Have someone with Experience with This Type of Netcode on the team (I Hope).

Unfortunately, I was never a huge fan of GG. Unlike Granblue, I just didn’t enjoy playing most characters in past versions nor its battle mechanics🤷 I’m torn but I will just end up buying and playing it just a bit assuming the characters are mostly the same.

Me Too… I only Played it just for Baiken… and since she hasnt been anounced yet then I too shall be skipping GGS… until they bring back Katana Waifu !!!