This topic seems to be popping up on other character boards, so I figured I’d start one for Glacius.

I doubt any of us are going to guess right, but what do you guys speculate Glacius’ color 10 will be? (assuming that’s what the figure gives you)

There’s a Glacius figure? I only know of Jago, Shago, Sabrewulf, Spinal, Fulgore, and Hisako.
Link?

There’s a Glacius figure? I only know of Jago, Shago, Sabrewulf, Spinal, Fulgore, and Hisako.Link?

He will come in Wave 2. We already know Ultimate Source will tackle every character on the roster, but the set will come in waves. So, even if he isn’t up to view now, he will be down the line.

I doubt any of us are going to guess right, but what do you guys speculate Glacius’ color 10 will be? (assuming that’s what the figure gives you)

Oh I know I’m right! It will be white. I mean think about it, Glacius has black but no white. White with Glaciers like come on, it makes perfect sense. I don’t know the extra color or shading but it will surely be a unique color to compliment the white.

First I’ve heard of the 2nd wave of figures. Thanks.

They post it a lot on their twitter and how they will feature more later down the line in a wave 2.

Wait is it absolutely confirmed he’s coming in Wave 2? @oTigerSpirit

It would be interesting to see a chrome skin for Glacius imagine instead of ice he uses some kind of futuristic reflective glass.

I can almost bet on it, no official confirmation - I’ve been reaching out to them to confirm. Still, I would think it is quite possible, he is popular.

T1000 style all chrome alt would be cool too.

I don’t know what I would want TBH…he has a great selection already.

Chrome, just like his Retro, but for his main costume? I guess I could get behind that.

Just throwing out another idea: 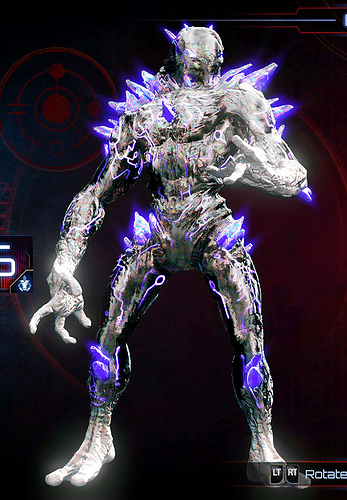 Also, not sure if it reads too well on the pic (click the pic to make it bigger to see clearer) but as for how his body surface reflects light (including his external bones), he has that ‘mother of pearl’ rainbow-like effect. So wherever the lighting hits him on the right angle, you’d see that effect on that part of his body.

exactly but more clear soon invisible. so its difficult to see peciesly what hits hes doing( since hes water based)

I like the idea of a white skin a lot! It’s one of my favorite colors because it combines so well with just about anything. A long time ago I did a couple of VERY quick mock-ups here: I think it would combine very nicely with some shiny, metallic gold spikes, as seen in the first example. However, I also think that Shadowman’s mockup could hold some weight; IG seems to really like adding random glowing bits to the characters, so while it’s not something I would be super into, I could see them going with a similar approach to that. The idea of pearl-like iridescence is something I would DEFINITELY be into, though, that’s such a unique approach!

yes, I love the gold I’m thinking ruby red eyes would pair well with that.