GG Rev is soooooo freaking hard for me to get into

So I recently got a PS4 to try out thier games as well as GG Rev.

I’m a pad player who is using Slayer, and jeez is it hard. Ill be upfront and say I didn’t try all the tutorials yet. But I am familiar with the franchise because I used to play the single player on the PS2. I was never really “good” at fighting games until started playing KI.

I wouldn’t feel so bad if the netcode was decent. Maybe I’m spoiled from KI but the online experience hasn’t been impressive so far (I’m in the Midwest).

How does everyone else like it? Anybody want a set?

Unfortunately, I don’t own this one, so I can’t take you up on the set. Ping would be super low though!

Sidenote: I really hate the Dualshock 4’s D-pad. I never noticed it before but it has similar traits to the Switch’s D-pad.

Sooo… I’m gonna drop Xrd and try out BlazBlue: Central Fiction. BB seems to be at the same pace as KI.

Buy a brooks converter use xb1 pad on ps4

Funny story is that it seems that BB seems to be much more mechanically harder than GG rev. At least if Maximilian is to be trusted. Maybe it’s the charecter you tried out. I watched a bunch of GG tournaments and slayer seems to excel in canceling moves into cool setups that’s hard to block that someone who just started may not know or may be straight up hard to do.

Try a different character first before abandoning the game. Starting with slayer feels like seeing someone start with idk kan ra or aria and get disappointed when the real good stuff those characters can do are not available day one.

This is what you’re talking about? https://www.focusattack.com/brook-super-converter-xbox360-xbox-one-to-playstation-4-usb-adapter/

Hello there. I play Guilty Gear XRD -Revelator-, and it is very fun if you know how to play it. It has a pretty good tutorial mode, character specific combo trials, and some light match-up tutorials too. I suggest not giving up this quickly, it will be worth it once you know how to play.

A human bean known as Novriltataki made a tutorial series for learning Guilty Gear. Here is the playlist for it. I highly recommend watching this if you want to learn Guilty Gear. These videos also apply to Guilty Gear XX Accent Core Plus R.

Once you fully know how to play the game, you’ll notice how fun it really is.

Also! Try out this GGXRD “Character Main Selector.” It’s basically a quiz that will pick the character/'s that you are most likely to main. It is very accurate from my experience, as I ended up with both of my mains for that game. (Millia and Venom.) It should give you a good place to start if you are not sure which character to pick. CLICK THESE WORDS AS THEY ARE THE LINK TO IT.

The bean also made a short Killer Instinct guide series. Most people here already know how to play KI, but here’s a link to it anyway if you’re interested.

I did that GG character selector thing. I got Elphelt. Surprise I actually chose that character on my own.

I do not have much experience with Omen Or Cinder but not really as far as I can tell. Millia plays vaguely like Sadira though, with her mixups and such. She is a rushdown character with great mixup potential, and has great mobility. But she has low health and defensive options.

Here is another guide by the same bean. This is about the XX Accent Core Plus R version of Millia, but the majority of this guide should apply to the Xrd Revelator version too.

And these words are the link to her Dustloop page.

It contains her frame data and some strategies on her moves an such. It’s another very useful resource. That wiki also has info on every other character in the game.

Guilty Gear is a much more difficult game since there’s a lot more mechanic-wise that you have to remember. The netcode is mostly good when I play but I can understand if it might be tough for you. Blazblue is not forgiving when it comes to netcode either lol. Do not drop Xrd for CF. Just play both lol.

Slayer is a tough character to play at the start I would say. I think you would need a good understanding of how the game works or a good grasp of footsies before going for a character like that.

That character quiz is pretty good too. I got my main without fail and it couldn’t even give me a 2nd character. It knew me too well lol.

And if you want to get into Blazblue, here’s a character quiz for that too. I’d say both games are very focused on character specialty, meaning most people just play one character. I think it’d be harder to have subs since every character in each game plays very different so it’s very important to find what you like.

To vouch for that GG quiz, I took it, and the results I got were milia (a character lots of people tell me they think would suit me) and haehyun (a character I already play a bit.) The blazblue one gave me susano’o, hazama, and azrael–a character that looks really fun to me, and two characters I’ve already tried and liked (though currently I’m playing hakumen.) There’s a pretty good chance it’ll give you something that suits you.

It would be cool to have something like that for KI, actually…

I got Relius Clover for the BB quiz. My runner ups are:

That’s the character everyone’s been talking about when they say KI needs a puppeteer lol. 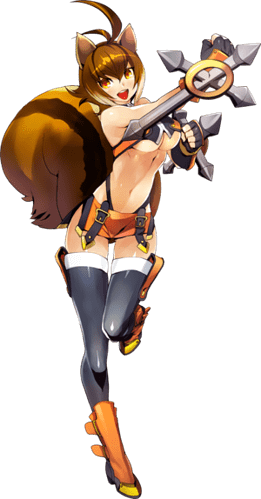 I recently tried BlazBlue CF on the PS4. The matches we’re quite smooth! I’m happy as hell about that.

I was having matches with this random person. He was trying to be flashy most of the time so I won some matches. But because of that I do see how enjoyable the game is.