So glad this character is in the game. Just went from bottom of Silver to Gold with just jumping HP and qcf+HK. Maybe if I keep this up I’ll get to Killer.

But I hope you are.

I’m amazed you got that far with only 2 moves, but I’ll chalk that up to everyone’s matchup inexpereince against him, since he’s an all-new character. In other words, your dumb luck (and I do emphasize the word dumb here - no offense, BTW) won’t last forever. Also, if you’re thinking you can keep up those kinds of shenanigans in killer tier, then you’re really full of yourself - killer-tier players will eat you alive if you try to pull a stunt like that. You’re welcome to keep dreaming, though - by all means.

And yes, he really is a cool character. His toolset is amazing - but if you’re only using 2 moves, then you’re really missing out on how much fun he can be…

If you want to really learn how to do some nasty stuff with the shadow lord, I highly recommend you hit up my friend, @Sasuke99I - he’s the best Gargos I’ve seen yet (and thankfully, he’s very humble about it, and open to sharing tech - he’s already got a few good tech videos here on the forums if you look for them).

Keep in mind both of those moves are unsafe. Be careful. Qcf-HK is a good wake up though. Jumping heavy punch if used up close is -3 so it is only punishable by dps.
@GalacticGeek I only have 1 tech video so far. That will change soon

Frame advantage doesn’t matter if the opponent isn’t blocking or punishing. This is a terrible way to play but I can beat Killer ranked players with it so I must be doing something right. 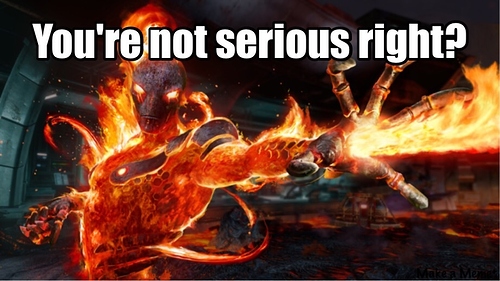 Show me a replay. I need to contact these players. If this is real,you have amazing luck. Good job. I need to try this with my alternate account.

Godspeed. Make sure to flap around before doing jump HP so people get frustrated and start mashing.