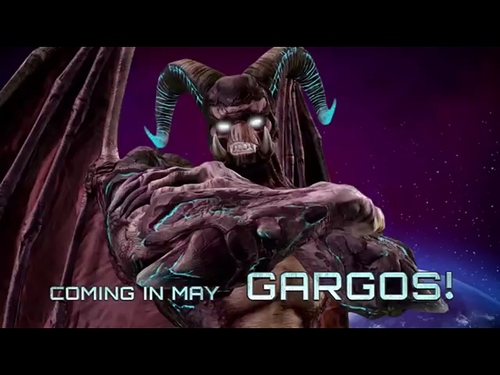 I am digging his design! This season is gonna be HYPEEEE

I think he looks pretty cool! Really wanna see him beat some people up! Lol I bet he looks awesome in action

I’m not entirely sold on his big goofy mouth BUT, I’m happy to see him finally. I knew he was going to be in-game due to all the lore leading up to season 3 but seeing him really does put my mind at ease. Plus I know he’s a little rough around the edges and they’ll surely polish him up a bit before release and if he still looks a little derpy, there’s always the retro costume.

Yep I’m sure I’m not the only one who saw Gargos coming back. Woo this is gonna be awesome!

but imagine the accessories… ooooooh the possibilities

He’s mostly nude so hopefully he has some kind of armor accessories.

I really hope that this is his stance, with his arms crossed. So badass

Well, he IS a minion of Gargos :U

So why is his energy blue? I thought the whole reason shadow energy turned purple is because Gargos corrupts it?

The story will probably explain. But I have an idea:

Maybe when Gargos activates Instinct he turns purple, and maybe that could be the power that corrupts everything?