Fulgore won't load but I own him

I was playing a little KI and noticed that only Fulgore is not loading on the select screen. This is only on my Xbox One.

I can play him on my Windows 10 PC without any issues.

I am using the same account on both and have unistalled everything and then installed it again.

My Xbox will bring me to the DLC to buy it but it states already purchased so I can’t even buy it.

I have Killer Instinct: Ultra Edition. I can also post some images if people want to see them.

Just an update… My profile can’t pick him but if I play the CPU i can pick the CPU as him.

There were some server issues last night with syncing DLC. Did you check “manage game” and see if Fulgore was in the “ready to install section?”

If he is installed then Id just wait for this DLC sync issue to pass.

Yeah I did that.

Strange thing is that if I install just the base game and use a guest account I get all the dlc. It does not have to be installed.

If I go offline I can get access to all the dlc also. I get that on my main account. Only when I go online does it say that I have to buy the dlc.

last night I was streaming & I couldn’t pick shago even though my DE disc was in xb1, ik my DE disc is working cause I could pick anyone from S3 since I never bought S3 by its self. so idk whats happening

Is anyone affected here in the Insider Program & is the box on a preview? If yes tell me what preview build .

If not, confirm how long / many days or hours this is happening .

This is now day 4 for me in terms of just this one bit of dlc not working on only one device.

The same dlc works on the same account on a different device.

Ok, we have a similar issue with Shin Hisako for Insiders builds Beta or greater. If you go to the store & collection in ki menu- do you see the Holiday Accessories banner?

Yes I do. I see the menu, the items are all unlocked for me.

The Santa beard does not load for TJ Combo. 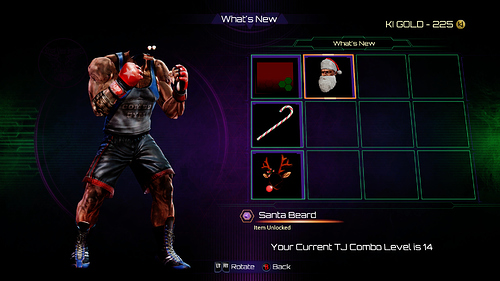 Ok, new variation of the issue! This is what has fixed everyone that has been missing Shin Hisako or Kilgore seeing the same things. Change your preview to Delta. When the OS update happens, confirm in system info, under OS version the build description is Rs3…1802…

Holiday accessories should be gone, all characters working and if you have VIP double xp that’s back as well.

Up to you to try, I personally also did this to fix my missing character.

Let me know if you try and if it solves it.
And forgive any typos - on phone and no glasses lol!

Heads up everyone- looks like the latest build fixed this for @pixelpixel without having to roll back!