Well look at what we have here… Shadow Jago buffs courtesy of our friends from Ultimate Source! 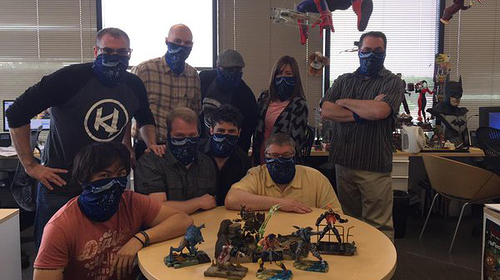 Awesome. Now I just need someone to explain what a buff is…

Was about to say the same thing XD

I notice the post still doesn’t clarify what a buff is for those who can’t see the image, any clearing up of this would be much appreciated.

Its basically a bandanna. DO you watch Survivor? “Drop your Buffs… the tribes are merging” That’s a Buff.

Thanks to those who’ve clarified what it is - I think I get where you’re coming from. It’s a shame that whenever things like these are posted up, (not just here, but generally), there is a misconception that everyone who is reading the competition can also see the image or images involved. That’s why I am pleased when writers describe what they’re giving away, even if it’s in a PR sort of style.

I’ve entered anyway, so we’ll all just have to wait and see who wins. However, it was implied in the original post that there are several, so who knows.

And a face-scarf at the same time

only wish we knew who won… I’m actually playing as Shago whilst writing this, just got beat by a mirror in online ranked then beat a normal Jago in what might be considered as a relatively close finish.

only wish we knew who won…

Yea it kinda bugs me it’s never announced…
I don’t have Twitter so I didn’t enter but still. Just like to know I guess.

I mean I guess you can understand they may want to keep the names private, but at least announce that the winners were decided so that we knew. Nope. Nada. Rien.

who won??? * never see the winner on here or twitter

I think they switched strictly to Twitter, as it’s more private than the forums. Someone must have said something.