I was finally able to beat Gargos in challenging difficult after a rush run because before this run I had a 25 turns run and wasnt able to beat him even with the shadow lord gadget, I was ■■■■■■ off 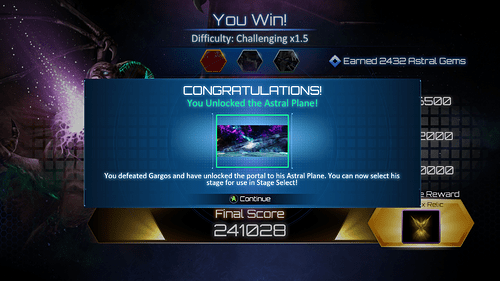 Gratz. I almost did it today, but as soon as he activated instinct he went into berserker mode and wiped his ■■■ with my face.

I beat gargos on normal, I did not get the astral plane

You have to beat him on challenging now to get the stage, it was changed from the beta.

Any luck so far on your end? I know you’ve been frustrated

This mode is advertised as a story mode. Yet , cutscenes are so rare, there is alot of reading with low font size, loading and transition times are too high and sluggish. The character interactions are just a chore to read. There are many other problems I see in this mode but to conclude where is the logic in making astral plane available on challenging ? I see mostly praises about SL in here and it mind blogs me whether we all playing the same mode. Ah lastly, after grinding hard to debuff gargos with aria, omen and shago,I beat gargos and did not get any ending of story content ( at least for Aria). This mode was a nice Idea but not well implemented at all. Low budget seriously made thwart this mode IMO

Congrats!
Is it too late to give some tips on beating him?

SL mode desperately needs a some Described text tools for people with difficultly seeing. (or just have tiny TV’s

)
I hope they put some in soon.

Believe or not I beated him with Ram guardian but the killer version, the 25% gadgets to have more attack and defense, first activated a hodorus wolf heart to spam shadow moves since the start and took 1st life bar quick. Then I didnt let him almost hit me, was spamming triplax and quick enders, if he ever got me with shadow punches then I activated ram to quickly get away. When he was reviving then just punch him with a HK or HP and he was with like 35% of life left, then again triplax spam and ultra.

Other run I made today was using snake with the first character but left him in danger status before he got me. Then with the other character I ultra him quickly and just had to fight against his last life bar using blue version of fractured ward and hodorus wolf heart.