Have you ever fell/fallen asleep in public including in class which I can certainly imagine many of you on the forums have done that before?

I have fell asleep in a number of public places as well as institutions before such as in the library, in the movie theater/cinema, and at the university where I once attended as well as back in high school AND middle school and one-time I have even fallen asleep in the saloon WHILE I was still sitting in the chair getting a haircut

I was getting a haircut once too when I almost drifted off. The stylist’s hands were gently tapping my head in a way that made me almost doze off in the middle of the cut and thankfully he caught me before my head leaned over. It was awkwardly funny and we still laugh about to this day. That was about 3 years ago.

I once fell asleep during a root canal. The dentist had to wake me up so I wouldn’t choke.

I fell asleep in class before teacher and students didn’t bother me either. Was a different time back then.

I once got in trouble for falling asleep in front of a class I was supposed to be teaching. Needless to say, my co-teacher was NOT happy. The students, however, loved it.

Apart from once passing out while getting blood work? It’s all been at school. Either on the bus on in a class I lost track of lol

College finals, anything is a bed if you have a good imagination.

I used to sleep on the school bus with my head against the glass window during over 1.5 hours worth of bumpy, rocky dirt roads every single school day…

I have a thing where i cant fall alseep outside of a bed. It doesnt matter if i stay up for over 24 hours, i will NOT fall asleep in any vehicle or chair.

But i still have a funny ALMOST sleeping story.

I once ZONED OUT SO HARD in my math class. I was staring at the ceiling, and leaning back in my chair, And the teachers voice just sounded like mumbles to me. I was sat zoned out for about 15 minutes in the dead-silent class when i began to “kind-of” hear the teachers voice. I barely heard her voice saying:

“The formula for the area of a circle is ‘Pi R squared’. There is a really dumb joke to help you remember it”

Hearing the word “joke” made me listen a little, but i was still zoned out super hard. Like… I was in another universe, i was so far gone.

Of course, that joke was not very funny, so the class was dead silent… Except me.

Apparently, me being zoned-out made that joke the funniest thing iv’e ever heard.

I slammed my desk back down, slapped my hand on it, and let out a massive: “BWAHAHAHAHAHA” for about 3 seconds before i realized what was going on.

When i came back to reality and realized what was happening, it was way too late. Everyone was staring at me like i was a crack-head. I stopped laughing and tried to apologize. There was about a 4 second awkward silence, then the teacher said “Ooooooo Kaaayyyyy then.”

Even as they tried to continue with the lesson, kids were staring at me with the most confused faces i have ever seen for the next whole minute.

That was probably the most awkward/funny things that iv’e ever done.

I sleep in the bathroom at work, slept while standing while serving in the Marine Corps, in classes, slept at my own wedding

Same for me here

I occasionally fall asleep at church…in fact I was nodding off today.

I also fell asleep once at the movies when the Empire Strikes Back Special Edition came out. I had watched the Star Wars trillogy so many times before that i guess it didn’t hold my attention as well as I thought it would.

If I am vertical, or even inclined greater than 90 degrees, I start to nod off. It’s like the sleepy-chemical in my brain is stored in a shot glass, and if it tips, it empties. Nuh-night.

Cars, buses, trains, break room, recliners, beds, lawn furniture, whatever. If I am not upright, I am unconscious. 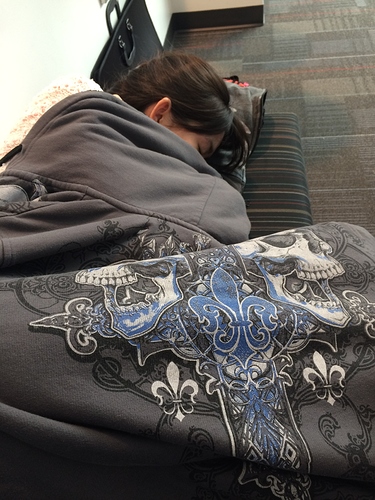 Edit: She’s gonna punch me for this

Checking my email for any school notification and I see this

You look very peaceful. Lol. At least you can sleep like that.

I kinda can’t. If I’m trying to sleep for a nap right away I can’t. It only happens DURING class. It sucks

Lol I’m such a lazy person, I can sleep almost anywhere, anytime.
Yeah falling asleep during class sucks. I always have class in early morning at 8 am, and most of my class are 3 hours straight so I know how you feel. The worst part is my seat is always at the front, right in front of the teachers, so I have to try my best to keep myself awake during class

The worst part is my seat is always at the front, right in front of the teachers, so I have to try my best to keep myself awake during class

I feel your pain. And the teacher is looking directly at you, and all you can do is:

Fall asleep during class all the time. After being out for a few years and having a job on top, whewee it tears me up.

Lol this is what I’m talking about