Honestly have no idea where to put this. All this rumoring/wishing for a return of the mighty slab of One-Eyed McSmash-Smash with a Club-Club got me to drawing Eydol in all his multi-headed, hoof-footed, pants hating glory!

I would think a modern update of him would just be this Juggernaut-esque, Zangief like mountain of cyclopian muscle. Would be cool if he eventually ended up as even an unplayable screen filling boss Character! But that’s just my dream (nightmare if he’s classic fighting game boss tough)!!!

Just my rendition of an updated 2016 Eyedol. I’m sure Iron Galaxy could draw a version of him much better then this. I’ve always been a fan of the idea that less is more. Simple designs are always more iconic in my opinion. Plus people who have difficulty drawing intricate character designs (ie: Me lol) sometimes shirk away from trying their hands at certain characters. I’m looking at you ARIA! I want to draw you so bad but WTF on the complex metal pieces that combine to make up your body. Darn you and your model-walking high heels!!!

Honestly I drew this real quick and I’m no professional artist, so no Ultra combos on my drawing ability. I bruise easily. And I cry a lot… Like a small baby penguin who’s abandoned by his parents cause he can’t draw for beans and won’t become a doctor!

Seriously though is this how this works? I draw something KI related and then put it up in the artwork forum??? 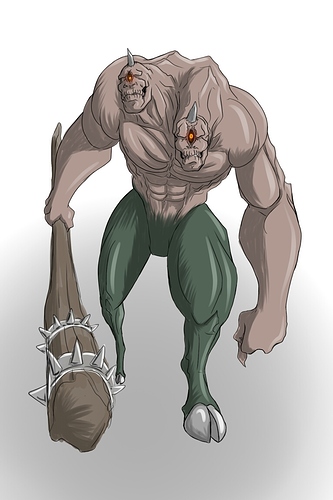 On a side note: Eyedol has two heads, but only two eyes… makes you think