In the patch notes they state these as the rewards:

I see all of that plainly including the fact that I already have Fulgore unlocked. So does that mean I have this exclusive color? If so what is it? I checked through and I have all 10 of his colors and the mimic and nothing seems new there. Confusion boys?

I just finished updating though.

I have no idea. Soz.

Oh man. I hope it isn’t color ten that is the new color. I have it too because I bought the figurine. I was hoping for an all new color.

I’ve supposedly unlocked it, but I’m not seeing it. Playing on Xbox.

I have it, it’s plain militar green for fulgore, I like it.

Is for people who didn’t bought them. Its a way to get them

I’ve supposedly unlocked it, but I’m not seeing it. Playing on Xbox.

You need to beat a SL Mission after the update for it to pop up.

The color is essentially his retro default color only 20x better.

ok… what a letdown… 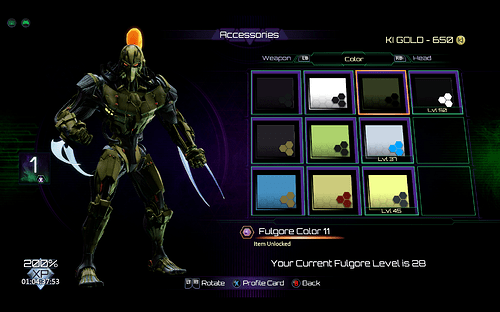 how do you unlock the rewards? the ladder says playing shadow lords, but I don’t know which objective complete the ladder. Is winning matches? defeat gargos?

It says archieves specifically from the patch notes. So getting dossiers on items, guardians, characters etc builds it up

oh I see, and until when I have the chance to get those?

Fill out the “Archives” by collecting dossiers and such.
Like, get dossiers on characters by fighting their mimics
or on guardians by using them. In short, play Shadow Lords.

I think that color is really good!

Jago is free for EVERYONE, but the Retro is not. Now you can unlock the Retro in SLs though…if you didn’t already buy him out right.

With Orchid, you can unlock her completely now in SLs. You don’t have to buy her anymore.