Don't Push a Button when TJ is reliving his Glory Days (a.k.a. Instinct Mode) 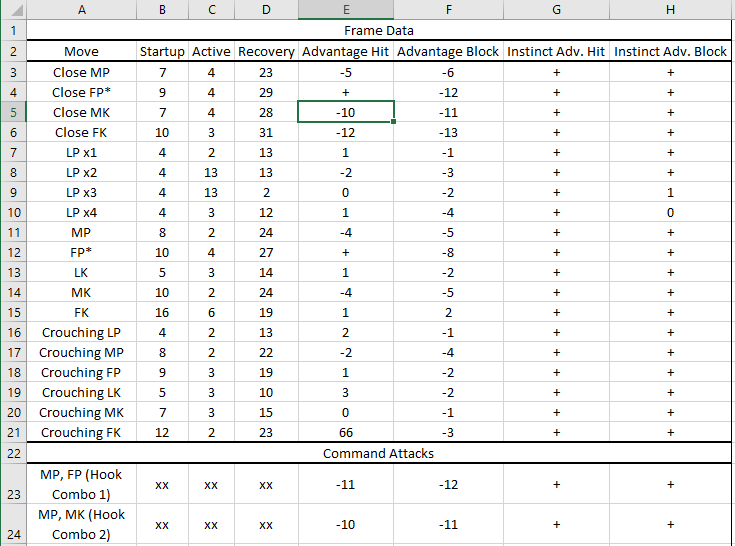 Yeah, just don’t. Shadow Counter, punish his Vortex/Cyclone, Tremor, Flying Knee or look for something else instead.

Of course. SC TJ in his glory days is probably the easiest to SC in the game. Since you’re just stuck in blockstun you can basically just put down your controller or stick and viola you win.

Auto guard makes that possible, you’re right. But in comes the possibility of not pushing buttons and walk up grab.

Of course. Speaking of which, can’t remember, does his regular throw grant a speed boost while in instinct?

It appeared to be the same. I’ll be double check tomorrow to make sure.

Yes, most of everything - in terms of his normal attacks - is + on block and you have to hold that frame trap or whatever action done by the user.

The more you know.

Where did you get that frame data sheet? I’d be interested in seeing the rest

I made it myself. You’ll receive it when I’m finished with the remaining S2 & S3 cast.

That is really , really nice of you Sir FinchoMatic

This looks great. It’s surprisingly difficult to find frame data on his instinct (unless someone wants to be awesome and link me to an analysis i haven’t seen?).

Doesn’t TJ’s instinct manipulate the speed of his moves from startup to active to recovery and not affect hitstun and blockstun at all? If so, your info on advantage frames, while relevant, would be well accompanied by updated frame data as well. How does one go about doing the type of study you’re performing? Would i be able to get this information myself?

Are you including instinct data changes on special moves as well?

Really looking forward to what you come up with. You’re doing Gargos’s work, keep it up.