So, Dead or Alive 5: Last Round Core Fighters is free now! It’s a great 3D Fighter with tons of action! It’s a bit execution heavy, but nothing our KI brethren can’t handle! I’m hooked on it. Lol.

I haven’t Played DOA in years, since DOA 3! So I’m picking up my Main Hitomi again, but I had to buy her. (#WORTH) If you guys are interested, Be sure to check it out, and maybe we can have some fun!

Seems interesting. Will check it out tommorrow.

Sure! If anything, you can look at my Captures and see some footage. It’s mostly just me doing Trials with my Main, and testing the Stage Transitions/Cliffhanger events.

I already own it and you’re right it’s fun. I main already Ayane and Momiji (though the former is kinda hard to get used to). But the online is tough man. Even in lobbies, you going to get curb stomped if you don’t know what you’re doing and there’s a lot to remember (especially the animations)

Is it free like KI where you buy individual characters? I wouldn’t mind getting it but I want the full roster to play with, been a long time since I’ve played DoA.

I play Hitomi & Akira. Though waiting for my Fight Stick to come in before I tackle Akira.

I am more dedicated to playing KI these days…

I use to play DOA a fairly good amount. I kinda stopped around the time Last Round came out though. I think it seriously became less fun for me when most of the little kids stopped playing around that time too lol. I play Rig, Jacky, Hitomi, and Raidou.

I’ve met a lot of scrubs along the way. I’ve seen kids complain about how juggles were unfair and cheap and then immediately turn on Tag so they could start doing Tag juggles on me. There was this time where I punished this one kid’s string with a throw, and then he was like, “OH KICK THIS GUY! HE HAS TO WIN WITH A THROW!”, and this other time where this other guy was complaining that he had to pick Gen Fu just so he could beat my Rig. Don’t even get me started on how many times I’ve heard people start screaming at me because they lost to my Rig and don’t know how to counter mid-kicks apparently.

Thinking back, those moments really made my day honestly. It’s just so funny to me how people could take the game so seriously that they start yelling at the top of their lungs about how you’re garbage and how you’re such a “try-hard” when they lose to the simplest tactic with an easy COUNTER, and even start calling over their “pro” friends so that they could beat me. Good times!

I love the DOA franchise as a whole but I really disliked 5 onwards, it really didn’t feel like the same Team Ninja (because it wasn’t)

I rather loved 4 and the online lobby with the avatars that you could customize, It was unique for DOA so I never understood why they took it out for 5. The character designs in 5 were not great for me personally, as a huge Jann Lee fan I thought they really took liberties.

Then the over sexualized nature of the game really turned me off, yes it’s always been sexualized but not to the level present in 5. I just didn’t feel the quality that was present in the previous games, plus the costume dlc was absolutely disgusting to the consumer.

You know what really is embarrassing? This here: 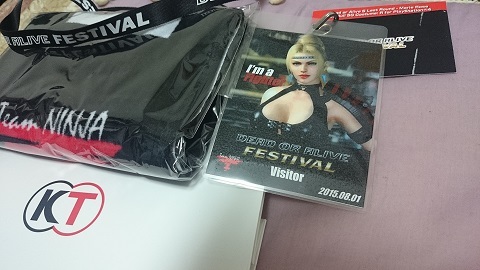 …it’s mine, that’s the embarrassing part

I had a Japanese lady ask me why I picked Rachel. It was an honest question. Couldn’t give her an honest answer, though. So I said it is for my friend @TheNinjaOstrich who likes everything big.

ps: the package includes PS4 codes for costumes but I don’t have a ps4…

its always been free though

Nice cover up. I know the true reason. LOL

I play Hitomi, but thanks! Lol Lets me know I’m literally everywhere you go in a sense.

That’s cool actually. You are lucky!

Goes into Combo Challenge for Rachel

Goes into Combo Challenge for Rachel

My favorite, the sheer power she displays. Wish they kept her hammer.

Waay off topic: can’t wait for Tusk! I hope they don’t get any fancy ideas and create a slim redesign. He needs a buff already, lol.

I don’t play it very seriously but I’m a fan of the games mechanics for sure. Also, Mila’s the best.

RESURRECTION!!!
Sorry about pulling out this old thread, just wanted to show this video of Mai being in DOA5:

Oh, Cool! Thanks for reviving this actually. I forgot about it. Lol. I might pick her up in the coming weeks. Seems like a LOT of fun. It’s cool how they kept how she plays, and translated it to 3D.

I’m actually shocked “Mr Nomoreguestcharacters” would enjoy this one. lol

But in all seriousness, she does seem like a lot of fun. I’m interested in trying her out.

I don’t play this game, so I don’t really care. XD
Funny enough though, the Virtua Fighter characters are so much more fun to play in DOA5 than in their own games. XD

I think it depends on the game too. DOA has always been known for guest characters, IMO besides the normal cast.

And yes, the Virtua Cast is fun to play in this game.

Akira and Jacky are my favorite.