Did Retro Fulgore get a visual upgrade?

Is it me, or classic Fulgore looks a tad better now? Like, with a metallic shine or something… can’t put my finger on it. Also, regular Fulgore has a hex pattern on his metal plates. I don’t remember that being always there, but I may be mistaken

He looks more like a man in a astronaut suit in his retro. Doesn’t look robotic enough.

He looks more like a man in a astronaut suit in his retro. Doesn’t look robotic enough.

He does indeed (his face still looks too wide), but he apparently looks a bit better now than in previous seasons. Retouched, maybe.

Maybe, can’t say for sure. I don’t use the retro to begin with. But…IG has done touch-ups before so…wouldn’t surprise me if that was the case.

He’s just as ugly, but he does look better on PC with the graphic upgrades there.

How recent did you notice this, could also be the relighting

It looks better now. Im very glad the mug face is gone. It was horrendous back at season 1. Props to IG from doing this little fix and he looks sooooooooooo much better with the new lighting.

I think it has to do with the relighting more than anything. However, with that said, I have noticed various small changes with the characters here and there. For example, Thunder’s skull accessory didn’t use to have jaws on it, so that at least confirms that they’ve made changes previously and may have done so again…

Retro Fulgore looks really good towards the old arcade look. But even if it looks a little bulky remember its the Mk1 and should look as such in comparison to the Mk3. Retro costumes are supposed to be similar and being exact is a tad much. I like the variety everyone has so far. The only retro I think needs work is Arbiter. His accessories are all recolors.

How recent did you notice this, could also be the relighting

Noticed it around the time Gargos launched (I hadn’t been playing KI too often for a while before that) … so the lighting probably has something to do with it. I can swear the hex patterns on regular Fulgore’s plates weren’t there before, though. You gotta look closely to notice.

The only retro I think needs work is Arbiter. His accessories are all recolors.

No Sabrewulf? His retro is atrocious IMO.

His skin could use a little thickening like they gave Cinder but I don’t really have many issues with it.

I didn’t notice a difference but the retro isn’t that bad, it just needs to be shrunk like 20% horizontally so he doesn’t look so chunky. 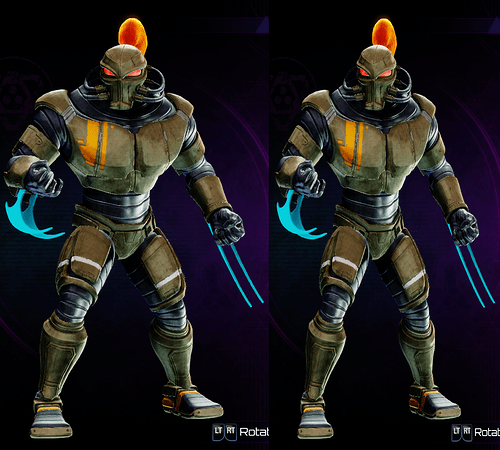 At least I think it looks a lot better.

so you understand his retro gets bulcky because of his standard costume.

While I like the idea of making the character model a bit smaller, it wouldn’t fit the idea of a man being in a cyborg-like suit of armor, as the figure inside would basically have to be as skeletal-thin as Spinal in order to fit inside…

The one on the right looks better.

all retro fulgore need is some stretch. The actual retro is too flat.

Didn’t stop them from slimming down/bulking up other retros.

I didn’t notice a difference but the retro isn’t that bad, it just needs to be shrunk like 20% horizontally so he doesn’t look so chunky.

Agreed, it looks a ton better like that… he’s too fat right now. But yeah, whatever made him look better is gone now, with the latest patch or something. He looked a lot more metallic for a while, like he does in the videos for TJ Combo’s story.