He has a pretty large following, I’m sure he could bring in some new players. Of course it’s not doing so well in the poll. His recent video included a poll on which games to play next week, but apparently 7 Days to Die is #1

KI is in 4th place.
Is it unrealistic to say we could get to first? 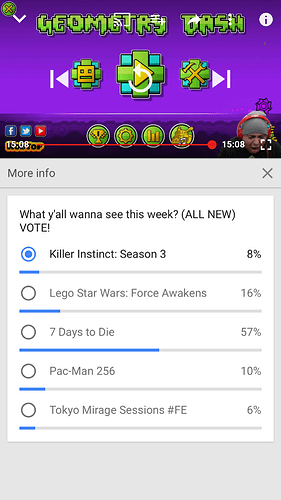 I think is a long shot but let’s try dude.

Aww, you beat me to it in making a post, but voted nonetheless

Is he a good guy to watch?

I went to his YouTube but didn’t see the poll. How can I find it?

He has played the new ki before, i don’t remember if it was s3.

As a longtime fan of his, ill say you REALLY, REALLY want him to wait till shadow lords so he gets a story to commentate on. People don’t watch him for his fighting game ‘skill’. At all. And therefore, he usually only plays fighting games to joke through the story. Otherwise it’ll end up being 1 or 2 20 minute videos of him button mashing.

He has played the new ki before, i don’t remember if it was s3.

I think he played KI during season 1.