This is the part where you need to tell yourself to ‘git gud.’ You’re going to have to learn how to beat spammers and break combos if you want to win. You won’t be able to raise up to the next level until you do. The people you’re playing against are Gold and Silver for a reason.

Backdash doesn’t work in corners, meter doesn’t build up as efficiently when blocking, the potential damage is smaller than the actual in the combo spam I was dealing with.

Backdash, depending on the character, can actually still have its uses while in the corner. As a general note though, it actually sounds like you need to learn to just sit still on your wakeup. You should not be waking up with tiger fury every time you get knocked down. Also, blocking is one of the most efficient ways in the game to build meter. And you shouldn’t be able to recover all the damage they’re doing to you with “combo spam”. That is their reward for opening you up in neutral - you are afforded the same opportunity when you land a hit.

But generally, it actually just sounds like your own game simply has holes that you’ll need to work on closing. Projectile spam in this game is, on the whole, not a very good strategy. Most of the cast’s fireballs aren’t particularly difficult to dodge, and almost the entire cast has shadow punishes for fireballs attempted in the mid-range. Ditto for consistent combos - it’s generally not a great long term formula for success, as it forces you to make hard reads on counter breakers as a precondition for victory. Spamming double roundhouse is also not good - the move is insanely shadow counterable. Most of the things you’ve mentioned in this thread actually aren’t great strategies; it is on you to improve to the point where you recognize the holes in these types of gameplans and exploit them.

It’s a fighting game. People playing stupidly is something we all have to deal with. Even Killers sigh

All I can say is learn how to beat these strategies and when the trolls get the better of you just forget it happened and move on. Work on your fundamentals, learn matchups and fight some shadows or Kyle CPUs. They will force you to use fundamentals whether it’s a part of your game plan or not.

Work on your fundamentals, learn matchups and fight some shadows

The KI shadows system is actually super amazing. It’s a legit way to practice matchups (if you find a decent shadow).

I just wish it was a bit more prominently displayed/easy to access.

It’s my sincere hope that S3 does a lot of work refining how they present shadows to us, making it easy to challenge any shadow with any character, giving us the ability to create more shadows, putting them in story mode AI, hiding it a bit less so more people will create and maintain one, etc etc.

I would like to see something along the lines of Replays that you can watch of your Shadow. Because we always just get the aftermath of the fight, (Wins & Losses and such) But we never get to watch the match. I personally would love to see how my Shadow reacted to setups and such, so that way I can train it into fixing it’s mistakes and make way for a more perfect shadow.

Yep, exactly. I imagine replay files are small… can’t they save all the fights our shadows were in? If we don’t check in for a few months, just save the last 10 or so for us when we get back?

The other thing shadows would be great for is learning a matchup with a new character. Say I’m trying to learn Hisako and I want to play against a Glacius player. If I don’t have a Hisako shadow (which is very likely since there are only 2 shadow save slots), I can’t go and fight Glacius shadows online. This is a real unfortunate loss of a learning opportunity that would be perfect for the shadows system. Why can’t I just do a search for Glacius shadows, find one I want to fight against, and pick any character I want?

^Goddamn, I just submitted a long-arse response in the Shadows section of the survey and I forgot to mention that.

Yep, exactly. I imagine replay files are small… can’t they save all the fights our shadows were in? If we don’t check in for a few months, just save the last 10 or so for us when we get back?

A few months might be stretching it a bit. Fight replays are probably tiny, but they also probably break if the slightest aspect of any mechanic is tweaked.

I love how this thread took a turn for the productive, so I’ve decided against posting a link to the “On Cheapness” article.

Damn I love this community.

Dont give up get better.

That’s preposterous and you know it

LOL If there is a Sadira about…

I WILL DASH AND DP THEM. 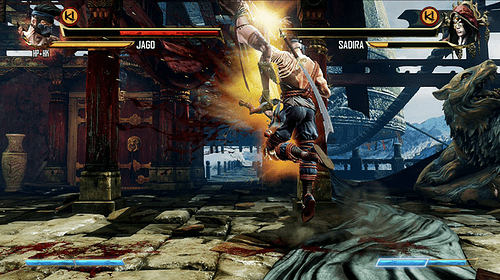 Sadiras, Beware of the Tiger Fury.

You’d be disappointed. I just hold back when a Jago rushes me at the beginning of a round. Either he jumps over me and I get the anti-air, or he DP’s like a nut and I get a full combo punish. Not too worried about getting thrown anymore.

People can tell you, I’m a Jago of Patience, I’ll wait for you. Because Sadiras kinda get antsy when your blocking everything. We will see…

Lol. I’m game - need to get back into shape with Sadie anyway. Shoot me a PM and we can set up a time to run a set

Sure. I’ll be sure to let you know when I have time.

Beware of the Tiger Fury you say?

Wrath of the Tiger Fury

I have only seen MrGrimmmz pull this off, not to say that others couldn't, just less likely now since it is less practical.. But, still! I have done it and figured it could be a move in itself, so I dubbed it "Wrath of the Tiger Fury". The objective...

LOL The Wrath of The Tiger Spirit!

Sadira is coming everyone hide!!!

That teabag quote post explained just about everything that has put me off from playing this and other games online.