I noticed that the stages look way brighter and washed out with the new lighting and I think this is for people who are color blind. But I like the colors like they are now more, they are more vibrant and have more constrast and overall look a lot better to me.
So can we have a option for (non-)colorblind people to turn it on or off ?

For exaple, Keits said that he likes the change to cinders stage because it was too red and he saw nothing because he is green-red-blind. (But in this case I have no problem with it because this is one off the only stages which aren’t bright and colorless, I talk about stages like Thunder’s or Riptor’s.)

This discussion was had when the first changed Fulgores stage and it was confirmed they did it because Keits is colourblind. I have always hotly disagreed that the game should be changed in a way that benefits a section of gamers and punishes another.

They should add an option but trust me they won’t

I know but Fulgore’s stage is extremly red again.
And I don’t think it would be difficult to add an option for this.

I am colorblind and my biggest problem with this game since S1 is to identify when the reactor bar from Fulgure is able to perform a shadow move.
I hardly ever play using him… Actually I tried for a couple hours in this double xp weekend, but I gave up soon.

It would be perfect if his bar was just like the others.

What did Fulgore’s stage used to look like? I wasn’t around back then lol 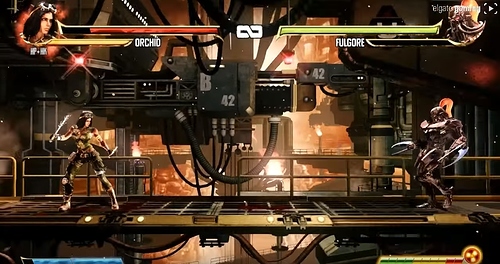 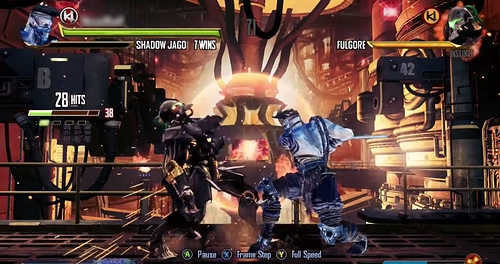 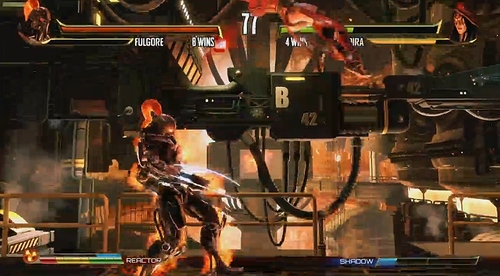 I have to say that Season 1 and 2 looked better in my opinion.

…it was confirmed they did it because Keits is colourblind.

Source = Show me where he confirmed they made this change exclusively to accommodate him.

Not sure why I’m having to do the leg work for something that is easy to find. For instance just hop on over to Keits twitter or in fact ask him yourself here? Ultimately they made the change because of his colour-blindness.

It wasn’t exclusively to accommodate him. He suffers from a form of color blindness that is shared by a lot of people. So they changed it to make it better for everyone.

This is false. Though no one should be surprised to see you spreading falsehoods, it is still disappointing to see.

Colorblindness affects 1 in 12 males, which is not at all a statistically insignificant portion of this game’s demographic. There are many people who work at both IG and MS who have various versions of colorblindness.

No one is “punished” by making it so that ALL players can actually tell what is happening on every stage, rather than having certain stages be completely unplayable for those player types. Many fighting games have been guilty of this, shipping nearly unplayable stages for a section of their playerbase. Most of the stages in UMvC3, for instance, are unusable because they are so dark. The lava stage in Vanilla SF4 before they toned down the red lightning. The burning ruins stage in TvC. It happens all the time and it sucks every time.

The TEAM agreed that adjusting the lighting was the right thing to do. Yes, I am colorblind. No, the change was not made for one individual, nor was it made at the expense of absolutely anyone. Period.

“I don’t think this looks as good/cool as before” is not a legitimate complaint in the face of “This is completely unplayable, I cannot see what either character is doing at all.”

Not sure why I’m having to do the leg work for something that is easy to find.

If it’s so “easy to find” why couldn’t you provide the info?

You’re not making this up, are you?

Just scrolled down - @TheKeits beat me to the conclusion.

They should add it as an option. If you suggest it in an appropriate place (game suggestions and feedback), I’m sure they’ll at least read and take it into consideration.

In a way, it’s possible to draw parallels to the “rant” that started me off in the middle of season 2’s forums - just because people complained about the HUD sounds, a large proportion of the players understood (once they were informed) why the new sounds were there (even though they still said that the sounds were unnecessary thus leaving the hUD slider by default as offwhich was a shame).

I’m not colorblind and I really struggled to see anything that was happening on Season 1 Fulgore’s stage. S2 was a bit better (though still pretty difficult) and S3 Fulgore’s stage is really, really red again (and the characters are also reddish), so… yeah I dunno. My guess is I’ll have to actively not choose that stage again.

I couldn’t play on Cinder S2 stage because it was too red. It sucks because the music is really good on that stage.

So yeah, even if you’re not colorblind, some stages are just too much. And KI isn’t the only game that has this problem (SF4’s volcano stage, even SFV’s extremely blue Lair of the Four Kings stage that obscures character silhouettes… I dunno why these stages have to be so aggressive on your eyes).

Sort of a similar issue. I remember asking a long time ago for Omen to have better contrast with the background. I have to admit that I still don’t or can’t see a lot of the first frames of the animations on his moves. To be totally frank, a detailed character like Aganos gives me similar troubles. I have to select his classic costume where most of his body parts are one solid color and have less small details otherwise i cannot see him or distinguish him enough from the stage background.

I think this is for people who are color blind.

Are you colourblind? No?
Then don’t assume anything like that.

Washed out? Are you serious? That’s the very problem with being colourblind… Colours look washed out and mix together and you can’t tell them apart if you are colourblind. And you think that washing out colours makes it so colourblind people can better see the stages? Really?!

Your ignorance is showing. If you didn’t know, then that’s fair, but that’s exactly why you shouldn’t make an assumption like that! The more vibrant colours are, the better it is for people who suffers from colourblindness.

Thing is… Killer Instinct was never about vibrant colours. It was about dark and ambient stages. Street Fighter is about vibrant colours. KI has more of an edgy comicbook look, where the things in shadows are really dark, and the things in light are more clear. And that’s the feel Iron Galaxy is trying to return to S3, because S1-2 was alot brighter and colourful than any of the previous KI, and alot of people just thought it felt wrong and out-of-place for a KI game. It just didn’t have that KI feeling (yes, I went there).

I am not saying it is perfect. The areas that a lit up should definitely be colourful and vibrant, but the parts in darkness should have that clear edge. The new lighting does that on some stages - Sadira’s stage is a perfect example on how well it works - while on Fulgore’s stage, as shown above, it looks a bit off.

But a colourblind mode? Really?
You have no idea what you’re talking about.

Yes I’m not colorblind.
I’m sorry that you feel offended by my statement, but I wrote “I think…” I never said “It is…”.

I watched the livestream from tuesday and it looked better than before, exept thunder’s stage.

I will close the topic now.