I believe that the first character that needs to be improved is Omen, physically and style. Give him a armor and make visible wings.
improve Orchid face new and retro.
improve Sabrewulf fur, and retro face (insert the color green retro)
Fulgore improve physical retro, and give him metallic effect also out of the match.
Thunder give his original custom retro.
improve Jago retro hair.
Simplify VS 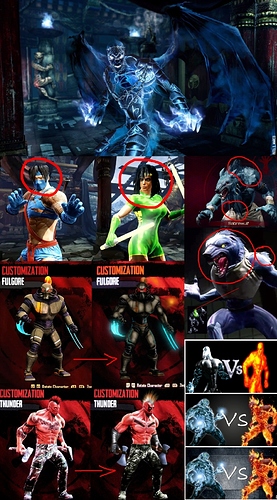 Or Glacius …
when Glacius is repeatedly hit her body heats up, but if you stand still for 10 seconds his body becomes even more cold and bright. This state ends if we get a combo of at least 5 hit or if we block 5 shots. During this state, Glacius moves based ice freeze the opponent and will greatly reduce the speed. the opponent returns to normal after 10 seconds if you do not hit again by Glacius mode cold.
http://forums.ultra-combo.com/uploads/default/original/2X/5/52a07f0a47e316c693997da9454234a8660a2ceb.jpg

Spinal…
When Spinal has five skulls.You can use them together to unlock a special Combo Ender. press: down, forward + all punches. Spinal transform in his opponent and performs a random Ender, in this case, of Orchid. The only control over this Ender regards its level, which depends on the length of the combo that precedes it. if it were to imitate Resource Ender (Aganos, Spinal) Spinal get skulls at the end ender. Spinal mimics the opponent really well, feel free to use the same accessories, the color does not matter instead.
http://forums.ultra-combo.com/uploads/default/original/2X/d/d9bf2f37e684875ec675cdb1eaa6c0510054cca3.jpg

When Fulgore has full reactor could send back the bullets of the opponent as the first KI, but could do so Jago, with a round of sword.

I completely agree with you.

Totally should bring back the animatons in vs screen before the fight just like in the old KI.

The same list of complaints since season 1 came. I wonder if they’ll ever be fixed.

I suspect the devs see no issue in many of those.

We won’t stop until they comply.

I follow the forum recently, I had no idea that these defects had been already proposed, it means you notice it in many, KI is a gem of video games, has to be perfect.

The only thing Op list that I think needs to change is omen’s animations. And even those aren’t even bad they’re just re-used from jago and sabrewulf.

The same list of complaints since season 1 came. I wonder if they’ll ever be fixed.

I suspect the devs see no issue in many of those.

We won’t stop until they comply.

Ummm…No offence but… The retros are not getting re-done and we don’t know if Kev bayliss is going to return for season 3 to make new ones, And the whole thing has been debated to death and it think the devs are probably tired of hearing the words “fat-gor” and sabrerat"

I rather the retros not be re-done as that time and money can be spent on things elsewhere.

Your Thunder Retro is Godlike!

Do we really need to start a new thread for this every other week?

Much better than the biker concept of Thunder!

I think the Devs are more focused on the future of KI than the past. I think the most we’ll get in regards to the Season 1 cast is stage Ultras. I think Combo’s retro is the one that really needs the fixing the most.

I think some of these requests are really superficial

Sabrewulf already is getting a new move, though I highly doubt it’s a projectile. But for arguments sake, I don’t think your idea would work for Wulf. So he throws one projectile… then what? Since it has to be charged by doing a combo he can’t send out more than one at a time, and since it has to be controlled Wulf can’t advance while it’s out meaning that once it’s blocked, dodged, or cancelled out Wulf is still stuck at full screen.

Make Saberwulf’s retro costume look like a REAL wolf! And change Thunder’s retro too to make it like his REAL classic costume.

As for Kan-Ra’s retro, have it shown in his story mode. Same with Hisako’s while she was fighting off the enemy in her past.

yep these are quite superficial but details man, they matter.

Give to Riptor his original green fire color for S3…and adjust the color of the flame of Cinder on hand at the end of a stage ultra. PS this is retro Eyedol costume.

And if ARIA try to use the power core of Glacius to bring in this KI, Eyedol? So use it against Gargos in S3, who better than he and his resentment could counter it? Also in the original story Eyedol was an instrument of Ultratech, only in that case was Sheridans to use it.

Make cinder’s aura a different color than his body. I.E. blue cinder with a red aura.

make retro Sabrewulf looks stronger everytime like he does while on instinct mode
make Fulgore lasers cross the entire screen while he’s on instinct mode. Also give him at least 2 pips per charge. He needs some buff!
make retro Cinder hand fingers more rounded. It makes no sense having retro Cinder with pointy fingers. pls! Although his eyes should be even more red, like the ruby color.
just use character renders at bg of the VS screen to dim loading times.
give us the option to choose automatic intro skip without pressing menu or any other button.
make Cinder damage more consistent. I mean more effective.
if Cinder is one of the chosen to be revamped, pls make him a complete thief. Forget about the corporative mercenary stuff. It would be a miracle if you revamp his voice too. Please find a better voice actor, i beg you!