So after noticing the new patch I wanted to play, but the client told me I had to update and exited to desktop. I could not find a way to force it to begin updating even after accessing my windows profile and finding the updates and downloads section.
I figured I could reinstall the game to force it, since updates tend to just do that anyways, but now I’m seeing this on the game’s store page:

I would really like to play some KI. Someone please help.

So I looked at my Windows Store library and it still shows KI on the list, where I then noticed this icon and message attached to it: 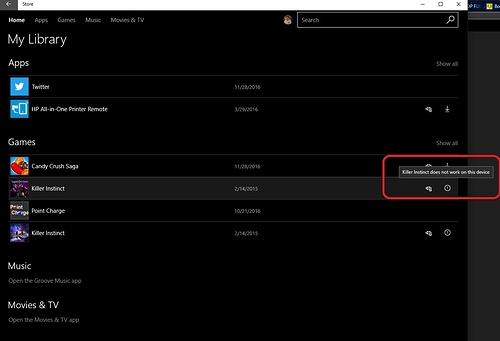 I would like to emphasize that I’ve run the game on my system before. Is there any dev I can @ that could possibly shed some light on what’s happening here?

Make sure you’ve installed the Windows 10 Anniversary Update, as that’s now required for KI to function. I don’t know the update/version number so I can’t tell by what you’ve listed if it’s already installed.

I don’t understand how that could be the case when the game was running for me no problem a week ago.

The most recent update to KI is the one which requires the Anniversary update, so you wouldn’t have had an issue being without the Anniversary Update until the KI update was installed.

This may or may not be the answer for your issue, but it’s the first thing I would check for, as Rukari mentioned that KI will not work at all without the Anniversary Update after KI 3.5 released. It sounds like that might be what you’re experiencing.

I see, that makes some sense then. I wonder why they had to do that…
I’ll give that a shot, thanks.

@xSkeletalx Though I don’t have the PC version, would this also be somewhat related to the Anniversary Update that just came out?

For I too can’t install or launch anything…

Greetings, just wondering if I could get any insight on this if possible @developers & @moderators So long story short the Xbox needed a reset, but after updating the system I tried popping in KI Definitive Edition only to see nothing was there. The thumbnail was visible, but selecting it shows absolutely nothing to install or launch. No characters, no packs, bupkis. The Icon Registering the disc is in the system. [image] What’s supposed to be “35” items to install, but nothing is there. […

the anniversary update to windows 10 is version 1607 if someone was wondering.

Okay I finally got around to updating to 1607 and everything is back to normal. Thanks!