Can we update Glacius' color 9 please?

Simple fix here, it would be nice if we could make the hands and the feet of Glacius’ 9th character color opaque like the rest of his skins. As it is you can see that the developers at Double Helix didn’t model the inner hands and feet, they say that were never meant to be seen according to the art book and it kind of looks goofy as heck. Especially since color 9 is so darn cool looking otherwise! 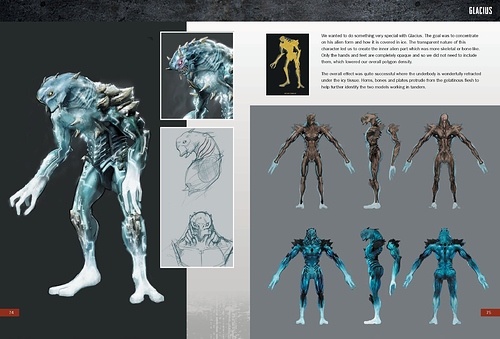 I disagree; I think it helps make him look far more alien in a sense. I like to look at it as an evolutionary “skip” as it were - his race couldn’t manipulate objects by hand, and was incredibly vulnerable with no solid body structure (like bones) or even to have a way to speak via actual sounds, so they somehow found a way to use their mind to manipulate the matter around them. This, IMO, is how they are able to have suits of armor that can “gel” and yet still be hard enough to protect them or to create the sounds they need to communicate and helps give them a far less vulnerable appearance to the other creatures around them - they’re the space galactic slug turned snail when you really think about it.

As interesting as it might seem or whatever head-cannon we come up with to explain it, it simply isn’t as the developers intended it to look and ensures that I’ll never use color 9. I respect your opinion but personally I think it looks awful.

I thought that was the whole point of color 9 is a re texture. I think it is like that for a reason as they chose to make his color 9 have clear hands.

Isn’t as the developers intended? You can’t possibly know what they intended unless you were on the development team yourself and I highly doubt that - and while you show concept art as evidence, it’s weak at best because concept art is exactly that - a concept, generally in the early stages of development. It’s in no way representative of the final draft. If you think I’m wrong, then you only need to look at the concept art of Glacius’ arch nemesis, Cinder.

Nope, I wasn’t part of the dev team you got me there but neither were you. So I guess my assumptions are just as valid as yours. The concept in the art book is directly reflective of what we have in game, I’d be inclined to believe whomever wrote it was correct. I mean I don’t think we would want a Bald Orchid glitch accessory or a mask-less Jago that shows that hideously unfinished face of his that was never meant to be seen ether.

Edit:
Didn’t expect to be so heavily opposed here, frankly to me it is clearly unfinished looking and the original team didn’t seem to think it should be seen so they didn’t bother to model the hands and feet. Then the second developer thinks it might be cool and goes against the grain revealing the cut corners of the first team. I love Glacius, he’s been my favorite character since I was a teen and it’s pretty disheartening to see him in such a state.

Regardless of the fact that you think it looks unfinished, it absolutely is finished. The fact of the matter is that even if the developers at DH were cutting corners, they ultimately decided to give him stubs - that was part of his final design. Then the devs at IG, taking what they had to work with, went from there with their own vision of sorts - but everything, from beginning to end, was as it was intended by everyone involved and is the way it was meant to be. You’re not 1 to say 1 way or the other. You can’t change the past, so stop dwelling on it and move on - if you don’t like it, then don’t choose the final color.

Personally, I hate some of the color choices on Glacius’ hands myself - for example, having white hands on his red and orange color? That’s just out of place, IMO. I also don’t like how he’s see-through on some stages with his retro. Does that mean they’ll fix these? Maybe, maybe not. The point is, you’ve officially let them know what you think - now let them take it from there.

So, let’s just sit, watch, and see what happens.

Yeah the skin DOES look great, that’s why its a shame the hands and feet are borked. >__<

weird as it looks I kind of like it. Helps it stick out alot more.

If anything, I don’t like how his “horn-spikes” on color 9 are blue… I kind of wish those were of a different color…

I honestly love the crazy glowing innards poking out, my only problem is what we talked about before. I wish they had done a blue glowing version of the horns accessory set to match though.

The skin is finished but it is not reflective of Glacius’ actual anatomy; nowhere in any of the concept art did they say that his race does not have hands or feet. What they did say is that they did not need to INCLUDE the hands or feet of his underbody due to the opaque nature of his outer model. Though frail looking, the underbody is what allows Glacius to move his icy armor/epidermis and function as a cohesive organism; it contains his skeletal, muscular, and even skin systems to an extent.

I personally agree with Crimson. Someone suggested a “fade” affect on his wrists and ankles so that they simply seem to dissipate into his fully transparent hands and feet, which would be another neat fix to consider.