Can Someone recommend any good Kilgore guides

I been playing him since launch but don’t know nothing. partially do to the fact of playing and following ki less in anticipation and part do to being bad.

Can anyone recommend a good guide.

-When you land a throw, always do HK rockets aimed at opponent’s head height (people usually aim ground idk why, u cover more area with explosion my way) you have many options:

-In neutral, keep maximum distance and mix rockets with chaingun attacks, you will usually want to get overheated as late as possible to bleed and frustrate opponent as much as you can

-use MK rockets, after inputting command hold up or up-left. Rockets will fly at opponent’s head and he will have a hard time jumping over it because they will explode at crosshair and deal splash damage.

Be careful with LK rockets because when they miss, they will keep flying offscreen to end of stage and you won’t be able to shoot another ones until that time. Altough they have also awesome tracking. The only upside of LK rockets over MK rockets is faster startup.

-Try to be reactive with chaingun attacks, do small pauses, so opponent takes action and you will counter hit him, when you spam these you will overheat too early and have hard time getting advantage through zoning. Use air guns more than ground guns because they are harder to punish. Be very careful when he gets meter.

-With chars that have teleport and have match up knowledge, neutral or back jump a lot with air LK because it crosses up. You will look like raytard but it works, trust me.

Good Morning!
I’m also using him in game. One of Kilgore’s strengths is the distance, until his weapons are warmed.
Two good tips to help in your learning with it: watch some videos. In addition to Sleep, Maury plays well with the character, and tracking his broadcasts in twitch can help with new tech ideas. The HYPEBEAMx2 also made good videos of his combos on Xbox Live, you should check it out.
Another way is to follow the tips of the Infil manual, which is well detailed, and is helping me a lot with Kilgore and other characters. I’ll leave his manual link here, and if you want, you can add me.
Good training!
GTs: LizMk35BR / FX Liz Mk 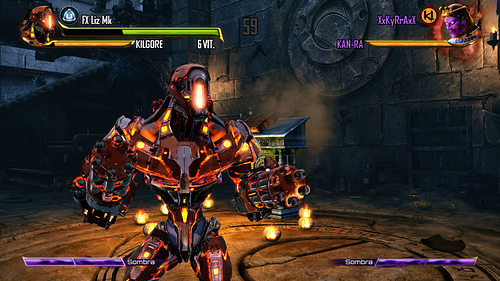