Let’s be honest, ultras were part of why ki was so hype, and with the introduction of slow hit ultras in ki2, doing an ultra was never more satisfying and another taunt to end a match.
I don’t know why they didn’t bring them back but my guess is they are too “slow” for the tournament scene (which they can just make an option to turn them off).
But now, to me ultras no longer carry any hype. Most of them happen so fast that they look like regular combos. I only know it’s an ultra by the musical cues. And remember the extra 4 hits you could add to the end of that in ki2 if you had the meter to do it? Ah man, those were the days!
Sound off if you want this feature back!

I feel as if the majority of the community will oppose your suggestion because of ranked matches. Actually come to think about it, imagine a douchebag pulling off a third ultra, TJ’s three-ultra is already at a solid minute, can’t imagine it pushing longer. Although I agree with your point of making Ultras more hype, they are don’t seem so appealing on a competitive level as much as they would in single-player. I wouldn’t much mind slowing it down a tad, as Jago had his during the first season but otherwise i’m not sure it would be ideal given how accessible Ultras are.

@ oTigerSpirit, hence the option to turn it on and off. I know the competitive scene won’t like it, but it will at least make ultras interesting again and put some fun back in the franchise.

Only if it zooms to the opponents face, and goes this slow:

They really need to / should / I really want them too (lol!) add all the bells and wistles of KI Gold in to this new KI.

KI Gold was my favorite KI…if you couldn’t tell.

All of the hidden special stuff you could do in ki 2 should be back. 1.Slow ultras and enders,). 2.Mini ultras (called assaults that should give you a super meter if you get 3 enders withen the first round).However you should still be able to do it.It was 7 hits.If u get the power up It should be 9 hits.And if u keep doing a combo after opponent is down,only they should get super.To discourage the trolling of hits on a downed opponent. Please change the breaker effect to ki 2.And it should add the c-c-c effect the more times u get a combo breaker.

I don’t think that is actually plausible. Again it can happen for single player but when two players connected online cannot have different options as in on/off. It has to be neutral. Also because ranked is best of 3 you can’t do an Ultra without them being forced to stick around. Love the idea for single player, just don’t see it happening in multiplayer.

Nope. No desire whatsoever for slow ultras. They already take enough time if someone pulls off instinct cancels and special juggles - I have no inclination to have to sit through anything else.

lol, it wouldn’t look nearly as good sense KI doesn’t use a physics engine that simulates impact. It looks cool in Fallout because of the physics but in KI you would just see a generic animation.

Overall slow ultras are a bad idea because of what I just explained.

sitting through those are long enough as it is. I don’t think so.

How about just mak it the last part(which is usually the launcher)be in slow mo as an extra input that requires certain timing.

I’m here to play some matches. I don’t want to have to go to shopping every time someone does an Ultra in ranked.

What part of “option” is not understood? I never said force slow-mo ultras on any one, just give the option. And I agreed that it probably wouldn’t work too good for ranked, which still doesn’t stop there being and option that both opponents would have to agree to do it.
It’s simple, either you’re a fan of some form of slow-mo or you’re not.

I would not like that feature. especially on triple Ultra’s followed by teabagging…that would make me ultra salty 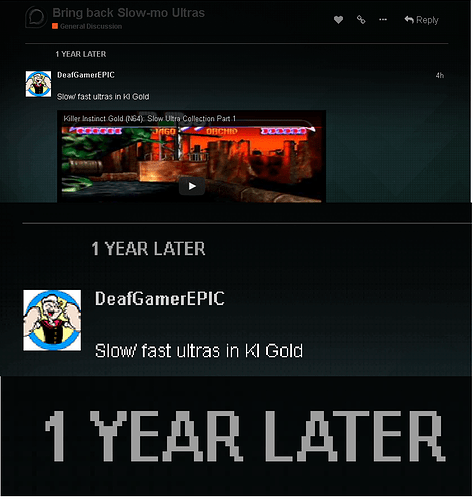 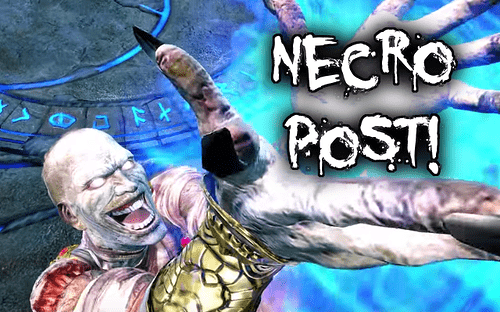