Bought KI Supreme Edition on PC. No 18K coins given!

Hi guys,
I’m so furious with the KI Supreme Edition bundle for PC. I just bought the bundle($49.99) and i got everything as stated except for the 18,000 KI coins. I called Microsoft Store to request for the missing coins or a refund but so far i’m stuck in a queue for more than 2 hours now…
Does Iron Galaxy have a support # that I can call or a tech support forum?
Did anyone get ripped off like me?

The 18,000K coins was only if you pre-ordered season 3, you only missed the deal by like 6 months. It doesn’t even say you get 18,000 coins on the Windows store page anymore.

Correction: It say’s “18,000 KI Gold (limited time only)” and the time limit was during the pre-order phase.

It’s not like you’ll even use the coins on anything. Unless you plan on playing Shadow Lords and just buying your way to victory then the coins are worthless. Thought they would have made unique skins for the gold to be worth anything but they didn’t.

They stated that was only going to be a limited time offer. It was more of an early purchase bonus. Game came out at the end of March and it is now almost October. You didnt get ripped off though, you still paid for the great game that you wanted. Think of it as a preorder bonus.

I would buy the skins, but unlocking them is park of the fun. Defeat Gargos 10 times with Gargos in your team to unlock his skin. Rash’s is another 15.

Just doing the Gargos mimmic run with Fulgore in the group would give you 50 wins towards the 100 needed.

If you are wondering, yes I have Fulgore unlocked, and I am 12 away from shadow jago. I don’t want to kill the replay by buying the mimmic skins.

How the heck would you get 50 Fulgore kills in 1 run. I beat Gargos using Fulgore twice and I’m sill at 13 points.
Note that Fulgore testing and malfunctioning Fulgore missions don’t count towards the total of Fulgore MIMIC kills.

I got 35 in one run, but that was a pain. The whole run was 74 days. Now I just do quick runs, because I am trying to unlock the Gargos, Arbiter, and Rash. I just skip days until Omen shows up them beat him. Then skip until the next one shows. After 3 or all 4 fall, then I skip to Gargos. This way is alot faster than fighting each day hope the character mimmic you want shows up.

With loading times you can beat Gargos about 5 times and hour. That means a character like Fulgore and Shadow Jago could be done in a few hours, instead of days.

Is easier to just beat Gargos for the mimic skins, that’s true. I already have unlocked ARIA (didn’t notice the mimic KO counter, just when I completed a mission the mimic was unlocked because the early access KO’s carried over), Kan-Ra (before I started to play the public version of Shadow Lords I already had destroyed enough Kan-Ras mimics), TJ Combo (too fast to unlock without beating Gargos) and General RAAM Mimic Skins thanks to that, I just need to beat Gargos 4 more times to unlock Mimic Rash and Mimic Omen. 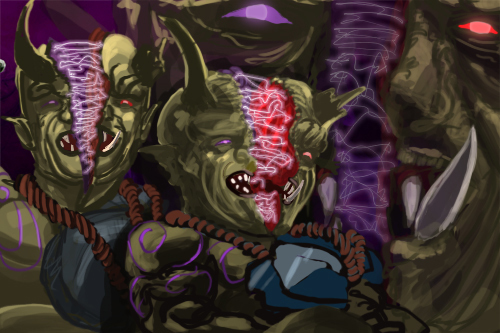 …sorry, I mostly play on PC anymore because the load times are nearly non-existent. I’m kinda getting spoiled I suppose.