Gearbox just confirmed BL3 a few hours ago. As someone who enjoyed all of the games (1,2, Pre-Sequel, and Tales from the Borderlands) I’m curious how they’ll change up the formula. I really hope the slam attacks and laser/ice weapons from Pre-Sequel come back for this one, those were interesting ideas that could greatly be expanded on for this game.

I didn’t play the pre-sequel, just because of a combination of burnout and other things going on, but I loved both Borderlands and Borderlands 2. Looking forward to this.

It’s a testament to how well the art style worked in the earlier games that this version doesn’t look all that much prettier. But I’m definitely ready to get back to Pandora.

Thing that caught my attention the most was the new siren girl. Sure she has siren powers, but she’s also super buff and her power manifests as more fists. She looks like Azura when she activates them and it’s pretty sick. 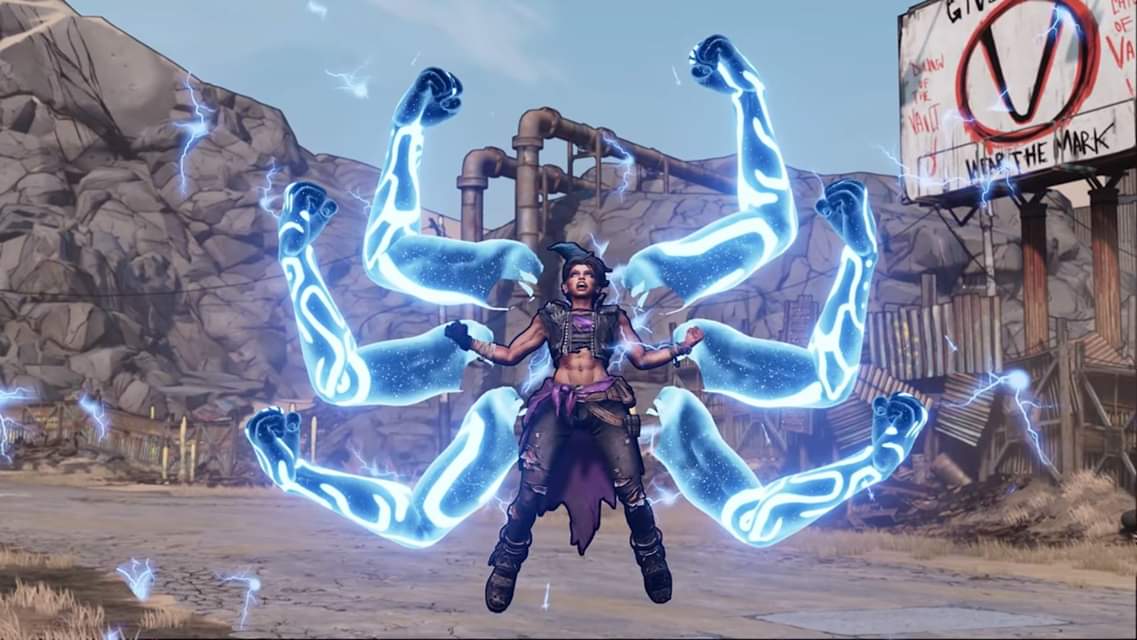 So, good news and bad news.

The good news is that Borderlands 1 Remastered launches today, and Steam users who have the original version get the remaster for free.

The bad news is related to the PC version of Borderlands 3. For those who don’t know, 2K Games (the publisher of Borderlands) has made a bunch of their games 1-year timed exclusives to the Epic Games Store (including The Outer Worlds, the RPG made by Obsidian), and there is a bunch of buzz on the internet saying the same will happen to BL3. This won’t affect console owners of course, but it’s a shame that the “console war” mentality has bled in so badly to the PC side of things.

If this does happen I can see a lot of negativity hitting Borderlands 3 for no good reason, especially with how the Epic Store is currently lacking in features and data security (like when millions of people got their info stolen because of holes in Fortnite’s code some time back).

Is it really getting as bad as console wars? It’s not hard to download and use another client on PC, though I can see the issue if people don’t want to put any information on a service with less reliable security.

Anyway, I’m glad this is coming much sooner than later. I was a little worried that we didn’t have even get a release window at the reveal panel. Having Borderlands back is going to be very refreshing in the current landscape of loot shooters.

It’s more of the issue that a bunch of games that were supposed to be on Steam just suddenly became Epic Store timed exclusives at the last moment (which was especially bad with Metro Exodus, Outer Worlds, and Phoenix Point). Normally you see this stuff on consoles, so some people are treating it as “Platform Wars” where they see Epic trying to strong-arm their way into the market. However other people (myself included) are just worried about the aforementioned security issues, or bothered by lacking features compared to Steam and GoG.

I am personally getting BL3 on XB1 since I no longer have a good computer for the newest games, but I’ve already seen PC users refusing to bother with BL3 because of this recent news. Though it should be noted Randy Pitchford himself already confirmed on Twitter this was the decision of 2K/Take Two Interactive, so we at least we know Gearbox had nothing to do with this (unlike with Phoenix Point where it was the dev’s fault).

Also yes, having a September release date of this year was great to hear. I thought we would have to wait until early 2020 at least.

Yeah, Borderlands 3 is a game I’m interested in, but not on the Epic store. I’ll wait for it to come to Steam.

It’s not so much the inconvenience of opening yet another launcher with yet another account and splitting my games library up (although that certainly has crossed my mind), it’s the fact that I don’t trust Epic or their launcher. Epic has a pretty long history of being dodgy with security, and people have already found that the Epic launcher collects data on other programs installed on your hard drive without your permission. Couple that with the fact that Tencent owns a large percentage of Epic and I don’t trust them as far as I can throw them. It also doesn’t help that their launcher is so anemic that it can barely compete with Steam 15 years ago on features, let alone the Steam of today.

Competition in the PC space is fine, but the way Epic is going about it is really underhanded (launch a bad product with bad customer service on a business model that isn’t long-term sustainable, just because they have a windfall at the moment) and I don’t really want to be involved.

Epic Games is without a doubt trying to strong-arm. There’s probably no other way to break into this market as something that can seriously compete with Steam, which is still to this day miles above everything else. Just in itself, and regardless of the sudden and clumsy nature of some of these initial deals, I get that it’s inconvenient but it’s still very mild compared to what console exclusives entail.

It’ll be interesting to see where EGS ends up a year from now. IIRC they’ve got a roadmap with timeframes concerning when many of its currently lacking features will land. Security & Privacy is another issue entirely, and one I hope is a priority for them for everyones’ sake.

last game i played was borderlands 2, i used the technomancer. pretty fun class, but the game got old really quick for me.

im also starting to see epic games throwing down the gauntlet against steam by getting exclusives. this is going to be the new norm, i would expect to see more titles being available only on their platform here on out. it really sucks because i dont trust epic games either for reasons mentioned above. i really really want to play the outer worlds, so guess im gonna wind up biting the bullet on that one. people would think with all the huge bank they earned with fortnite they would beef up their security to protect consumers :\

Yeah, Borderlands 3 is a game I’m interested in, but not on the Epic store. I’ll wait for it to come to Steam

Main reason I’m waiting until the Steam Release for Borderlands 3? The Borderlands games tend to give you bonuses stuff if you own the previous games in the series on the same platform. Not gonna miss out on potential free stuff for playing games I already own!

Plus, 6 months down the line the game will probably be a tad cheaper.

Well I meant try as in they probably thought no one would notice.

Well either way, everyone’s on their backs now since they’re treating the industry as “Pay to Win” in the worst way possible. I guess they weren’t willing to play the long game like GoG was.

Main reason I’m waiting until the Steam Release for Borderlands 3? The Borderlands games tend to give you bonuses stuff if you own the previous games in the series on the same platform. Not gonna miss out on potential free stuff for playing games I already own!

What bonuses were those? Extra weapons or skins? I don’t remember that at all.

Some decent starting weapons and class mods generally, plus extra Badass Points. I know in Borderlands 2 the Firecracker grenade you got from playing Borderlands 1 is so good that I haven’t had a reason to take it off yet in my last playthrough.

And yeah, a few bonus skins and colors. In a game and guns and vanity, that’s some pretty decent motivation for me

last game i played was borderlands 2, i used the technomancer. pretty fun class, but the game got old really quick for me.

One thing I hope they do is give the characters more abilities. Playing these games today it becomes apparent how games like Destiny and Warframe have evolved on that front.

I mean, in the Borderlands games you basically just get one action skill and its augmentations, plus a bunch of activated and passive buffs via the skill trees and that’s about it. There’s still some interesting gameplay and build variety there, but I don’t think it’d hold up too well today.

Lot of new previews came out recently. I’m glad that every character is getting three action skills to choose from. In general it sounds like they’re doing enough to bring borderlands up to 2019 standards.

I was hoping they would bring that mechanic from Battleborn, it was one of the better aspects of that game.

They also confirmed an option for Co-op which includes proper scaling for loot and the ability to get your own loot pools (which means no players stealing items from each other). Though they also brought back paid cosmetic DLCs from BL2, which has caused issues with some people (and caused Randy to go crazy on Twitter apparently). Can’t win em all I guess.

It’s more akin to other modern looter shooters which let you swap freely between subclasses, I think. It’s especially great because it lets them bring back action skills from previous games without letting the amount of characters limit those options. (Also Zane can equip two action skills at once if you forego your grenade, I read in one article.)

They’re also going for a hub system like other looter shooters too, with the new Sanctuary being the nexus between planets with a customizable private quarters. Ground stomp is back too, which looked pretty good in the preview footage when it was used.

I am so worn out on the internet mob demanding that developers not make any money. Isn’t cosmetic, completely optional paid dlc the “good” way of getting people to buy stuff from you? I thought this was what we were pushing for when we stormed the castle with torches and pitchforks over “pay to win” stuff. Instead it’s really just “Moar stuff!! No moniezzzz!!!” As entitled gamers work diligently to put game studios out of business somehow in the name of the consumer. It won’t be great for the consumer when there is no product.

Anyway, I think the strength of Borderlands has been in fun storytelling along with a loot grind that may not be great but is compelling enough to give you some reason to keep going. The rpg/shooter gameplay is a lot more fun than a lot of other grindy games and it’s a blast to play with friends.

So a new DLC for Borderlands 2 is out, which bridges the gap between BL2 and BL3. It’s free DLC until July 9th (according to the ingame menu) and it raises your level cap to 80. It also lets you bring in new characters directly to level 30 for the campaign.

I haven’t played it yet because apparently the Xbox servers got overloaded and the store page refuses to load. Hopefully that clears up soon, I really want to try out new builds with the new skip to level 30 feature.

When you boot up BL2 you see the logo of our friends at Iron Galaxy.

Please let Zer0 be playable again or someone cooler!