I would like to start using an arcade stick,its better feeling for me since i use to play a lot in the arcades and a better grip and not just thumb movements,im better with my hand than with my thumb.

I have seen all “compatible” sticks on microsoft website,the issue is the pricing,i wanna buy a stick,not make an investment

So the question is : can anyone (if more than one) recommend a fighting stick that is absolutely sure compatible (aka used by you or your friends) on a reasonable price for a casual non tournament non top 32 not even lowest 32 player?
Any info would be appreciated ,thank you all for your time.

P.s : Grammatical errors can maybe be found,i am sorry,English is not my primary language.

Hori rap 5 kai. Ive been using it in pc since season 3 launch and ive used it on x1 consoles

I forgot to mention that i live in Germany and the price range you provided is the one that i cant afford.It is similar pricing with what microsoft “suggests” and the shipping/toll costs will take it above 200$.Thank you for your reply!

Trouble is, a sticks gonna run you a pretty penny either way…

But, let’s see… if you can find a X360 Razer Atrox on sale, BUY IT! They’re normally like $150ish USD, but you can find them as low as $80 USD. Stock parts are good, super easily replaced too.

I have an older Qanba Q4RAF (bought used on the cheap), and I will absolutely swear by this thing. Held up the last 3 years with minimal issue (buttons wear out after A LOT of use), but not quite as easy to mod (just a few screws though, no biggie). They usually float in the same price range as the Atrox, so if you can find one used or on sale, also likely to be a reasonable price for a good investment.

Third recommendation is for if you have small hands. Recently picked up a Mayflash F300 (for the Madam) for about $40 USD, and it’s alright. The parts feel a little on the cheap side, but it’s no more difficult to mod than the Q4 and is compatible with Sanwa parts like every other stick. The case (or body) is pretty small though, the joystick is a little close to the buttons, and there’s not much room to rest your wrist, but for $40ish it’s a very good value. It looks like cheap piece of crap, and there’s no plexi cover for art, just flat plastic - but it performs much better than it looks.

Those are my suggestions. I’ve been pretty lucky with sticks so far, but definitely keep your eyes open for sales and stuff. The pile of sticks in my house looks like I spent A LOT more money than I actually did - shop savvy. Cheers!

EDIT: I mentioned these three because they all work for KI natively, no third party software needed. I have personally played KI S3 on PC with all three of them.

EDIT2: If you play on XBone, I don’t know if my recommendations work… I don’t play consoles.

If your playing on the console I recommend the Mad Catz TE2. Its the easiest to customize… if has a cool compartment for the tools and wires, ect… the box is somewhat of a carrying case. You can get them on sale from Overstock.com for 180$. Its not going to get much cheaper than that unless you get one that isnt customizable, with no storage compartment, ect… and in the end your only saving about 30$ so why not just spend the 30$ and get the best?

One of our forum members Krizm has a ton of free KI art templates you can print and use for your stick.

I have a TE2 and it works great! I dont use it as my main stick since I had my own personal fight stick built… but I dont think you want to spend that much.

SO yeah…Mad Catz TE2… Over stock.com. There is someone on the KI Facebook page selling a new Cinder TE2 for 140$ I believe. Try Ebay as well.

If you want a fight stick you are going to spend over 140$ so might as well be prepared for that.

I have no idea about this one but it looks to be the cheapest Fight stick available.
87$

Conquer the next generation of fighting games with the HORI Real Arcade Pro.V for Xbox One, Xbox 360 and for the first time Windows PC. Easily switch between platforms with a flip of switch, and plug and play on Windows PCs. | eBay!

That’s the Mayflash I was talking about! It’s actually NOT a total piece of junk, definitely serviceable. But it is SMALL.

Best xbox one fightstick hands down is the atrox

Followed by the te2 and then hori

Hello dear users and thank you for your replies!
I am a pc user,my last console was a Ps1 model 1002.

I m possibly going to get ATROX since it sells here in Germany,price is around 200$,i have seen also some very cheap/basic offers around 50-60 euros (about 80-90$) but i am almost certain that 1: the thing will break in my ape-hands and 2 : its going to be very loud when hitting the buttons , so im gonna save a bit of money and get me Atrox,looks really nice and convenient.

My hands are big , i mean the palm of my hands with the fingers (yeah you get them too) its 22cm long (metric system!!!).

Thank you all for your replies and your interest about your fellow player! 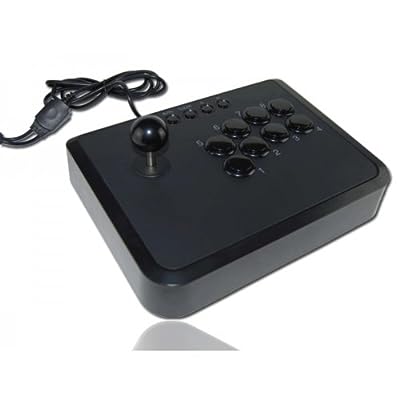 User reviews are good,you can customize it ,change buttons etc,and the pricing makes it an “immediate” buy compared to the razer one.

I haven’t seen that one… Looks mostly like the other Mayflash, dunno about size. I have pretty huge hands myself, and I love the Atrox. Feel like a gorilla playing a xylophone when I use the little Mayflash. I didn’t know if you had tiny hands or monster hands when I recommended the Mayflash.

EDIT: From what I understand XB1 sticks still have driver issues with KI (maybe other games? I don’t play other fighters anymore…), but X360 sticks work just fine.

EDIT2: About button loudness - all the sticks I mentioned are loud, but that’s because I’m a beast on buttons. The Mayflash really isn’t noticeably louder than the Atrox or Q4. Noticeably smaller though.

Xbox one sticks do not work on pc

Atrox 360 version was compeltr trash they failed alot at tournaments