Anybody have any weird fighting game controller configurations that they want to share?

For KI, the default configuration that I have for pad and it is perfect for me. I just use the right stick to Combo Break. Tekken is fine for me too.

Whenever I play play a Street Fighter game, I switch the light inputs with the heavy inputs. I feel like the heavy inputs are way more important to land than the lighter ones so I need quick access to them (shoulder and trigger buttons suck).

I feel like I need to customize my configuration for GGrev but I’m just kinda lost.

I use keyboard, that’s weird enough.

Not really a configuration but for some reason my controllers RT & RB will stop functioning in the start/middle of a match. This only happens when playing KI and only KI, any other game it works perfectly fine. If I pause and try to change another button to use RB & RT they’ll work perfectly fine there as well. No idea why it happens but it has cost me many matches, ironically it’s my controller with the DE skin.

For a while I played SMASH 4 in the now long dead Wii U with a Gamecube controller… and I changed A for Special and B for Normals.

It didn’t change the fact that I just dont understand the meta of the game, but it is fun.

Also KOF 98 and 97 with Keyboard… using the directional Key pad for movement instead of ASDW. 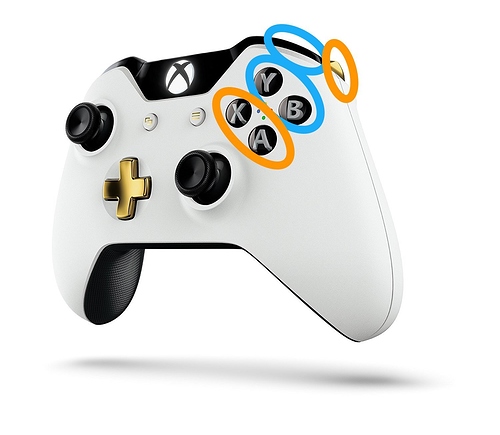 I call those the “inner” buttons because they have a short reach for my fingers to get to. Similar to how our hands actually work, they have a limited reach.

I call these “outter” buttons because they have a further reach for my fingers. Similar to how our legs work with a longer extension.

It’s pretty silly, but because of the science behind it, it lets my brain see it as so and it makes the inputs easy for me. I truly don’t know why I did it, but I just did.

You keyboard warriors are strange creatures.

I still use something akin to the default SNES controller settings with Heavies & mediums on the face buttons…Lights on the Rs, mediums on X & A, Heavies on Y & B…and triples on the Ls.

I use the Xbox Elite controller for KI and had to configure a new button for HP. Since HP was assigned to RB I used that at first but the RB on the controller kept breaking for some reason (maybe I was pressing too hard). So since that button wouldn’t work properly I had to assign HP to another button so I tried one of the buttons assigned to the paddles behind the controller. And it works out great now! My thumb can access all the light and medium moves while my index finger rests on the trigger for HK and the rest of my fingers are resting on the paddle for HP.

I’m learning to use hitbox so usually use it with a normal config. I prefer using pad for Tekken, but I play King so it would make his chain grabs much less consistent.
When I played Smash, I liked using the tablet and changed B to jump, A to attack, X+Y to special, right stick to perform tilts, R1 to grab, and R2 to shield.

So it’s easy to access the normals, fairly easy to roman cancel and use dust, and I won’t hit burst or blitz shield by accident. With pad, I’d put RB as dust, LB as roman cancel, and LT as burst.

With pad, I’d put RB as dust, LB as roman cancel, and LT as burst.

I gotta try this. This might be what I need.