I was just talking with guys from another games and we kind of discussed about Darkstalkers and Guilty Gear. For what they said, compared to Street Fighter . Guilty Gear was mainly about zoning/ rushdown set ups and no neutral game, while Darsktalkers had a bit more neutral.

What do you think about KI?

Depends of what you call “neutral”

Also, KI has a grey area in which players have to make choices which doesn’t happen in other games: The mind games of the combo system

IMO, getting hit in KI is not like getting hit in another FG. I kinda consider being hit by an opener as “huge chip damage”, and every hit I get until the ender an extension of that chip damage. The real “hit” comes with the ender, and the damage you get by two(not very long) breaked combos is similar to the chip damage of 3 mixups in Injustice or MK.

My point is that every game has its flavor, and KI its quite hard to fit in one. The amount of neutral you see in some matches hugely depends of the MU you are seeing

Also, KI has a grey area in which players have to make choices which doesn’t happen in other games: The mind games of the combo system

Fundamentally, I think KI is pretty much just a faster, more offense-oriented version of Street Fighter with a different combo system. The mugen-like cast of characters makes the exact flow of the game very matchup-dependent, though.

These kinds of simplifications can be useful, but they never really survive detailed scrutiny. As @Dayv0 points out, the combo system is the defining mechanic for KI and - as you observe and most people agree KI (because of the combo system) doesn’t offer any “breaks” for the player mentally. It is a fast paced game and although the execution and mechanics don’t require that much agility it is VERY mentally taxing to keep up with what is going on in KI. The high paced offense also means you rarely see any significant time in neutral where players are repeating similar “safe” pokes etc.

I would say KI falls between SF and GG in the neutral game. Characters aren’t quite as mobile as GG but they have more and quicker neutral options than SFV.

The only 2D fighters ive played are DBFZ and KI, so I don’t have much experience in other fighters. But from watching matches of the game, KI seems to be a much more aggressive version of SF.

But even then it relies heavily on MUs. You can’t play one match like the other. Sometimes it can feel like a slower, patient match that relies on footsies, the other about zoning, and the other is crazy enough to be on par with other gimmicky fighters. The KI playstyle is so varied that it’s hard to describe shortly other then maybe using the words “more aggressive”

It even depends on the player imo. Say I’m playing Cinder v Jago. Most Cinders just try to zone with the Cheeto balls and either advance on me or wait for a mistake on my part. I’m the one who has to chase. But sometimes, that MU can turn into a serious footsies match, where we would both be midscreen, using our longest range moves to try and open each other up. There were lots of AAs and mind games and quite frankly one of my most favorite MUs if played that way. Just goes to show how varied it can be at times.

Since it’s a fast paced game I really wish KI DIDN’T have so much effects going on. The screen shaking and the over visual effects in “normal” situations make the game so marvelish.

I’m complaining again because I ran a set with a friend yesterday. Orchid with her firecat exploding all over the screen and the normal effects in the game made it a mess (it also has to do with certain match ups, like Aria, Rash and Orchid Instinct, Cinder!, sometimes Omen).

This became more obvious while playing SFV. I LOVE how neat the game is visually.
For real, in my case this is affecting my gameplay more than I would like too (specially when tired).
Don’t care about specials and ultras (or Raam’s instinct for the record). I rely on breaking by sound most of the time because my vision strees too much =( 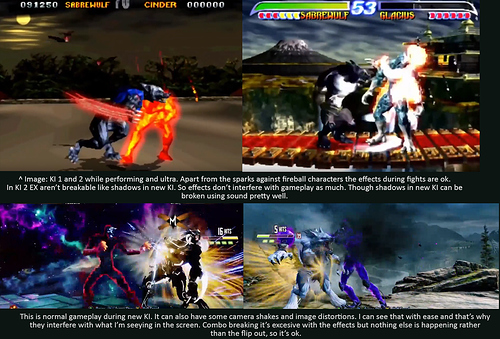