I wish that the unlockable Shadow Lords dossiers had been easier to unlock over the past year, because I’ve been collecting a ton of them since the latest patch (thank-you @developers!) and taking in the subtle threads that have been laid out that could very well hint at the future of KI.

The dossiers and storylines hinted at Kilgore (Vaguely “introduced” by ARIA in a special Shadow Lords mission), Eyedol (The “weapon” that Kan-Ra was trying to assemble to take down Gargos), and Eagle (Glacius, Orchid, ARIA, etc. dossiers all referenced Eagle in various ways) before their respective releases, and it hit me that two very interesting unexplored plot points might be a glimpse of what’s next: 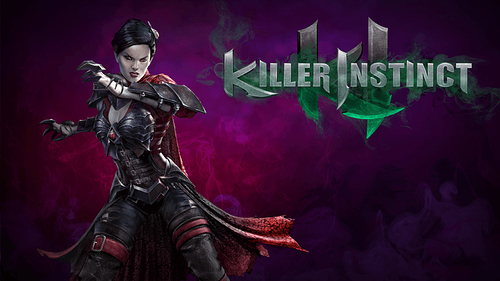 Point A: Does anyone remember when Mira stole “Ancient Egyptian Resurrection Spells for Dummies” from Sabrewulf’s basement library? It was first documented in this fantastic novella, and Mira’s misadventure was reconfirmed in a dossier that I recently unlocked. It seemed like it was extremely important that Mira recovered the book for the Coven, didn’t it?

With the Coven causing trouble for our heroes and villains in the comic series, the vampire clan might have a substantial plan for filling the vacuum of power left behind when the Gargos Armageddon was cancelled in Shadow Lords.

… In other words, who or what do the vampires want to bring back to life using long-forgotten magic??? (Yay, new monster!) 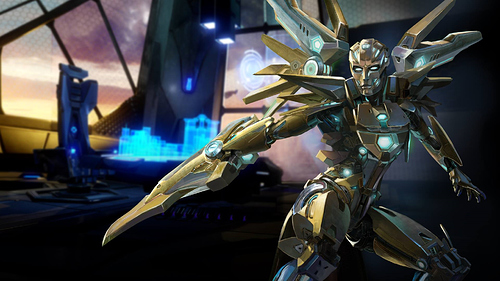 Point B: Between Eagle’s relatively recent backstory dossiers and ARIA’s, it is apparent that she wants to “evolve” into an organic body of some kind. I believe that Eagle, Fulgore, Kilgore, and other Ultratech experiments to some extent or another laid the groundwork for ARIA’s impending flesh-cyborg body, which may reintroduce her as the new big-bad in the future.

I can absolutely imagine an “ARIA, Evolved” fighter that looks like a beautiful human woman with the mind of ARIA throughout her first (green) life bar, but as soon as she falls into her second (red) lifebar, she has an Instinct-like animation where her human body is enveloped by her hidden nanobot/cybernetic enhancements, which puts her new body into “recovery mode.”

ARIA, Evolved’s “human form” would fight like Orchid, Jago, Maya, etc. type human fighters, but “recovery form” would fight like one of our monsters, since the defensive robotic bits would morph into things like lobster claws, spines, mantis pinchers, etc. to protect her vulnerable organic body while her mechanical side emulates the best defensive and offensive tools that nature has to offer. It wouldn’t be the first time that Ultratech looked to nature for offensive capabilities! (Riptor!)

Yeah, I can’t fit Sharkman into either dangling plot point either, but these two look like they have plenty of room to expand the KI universe. I hope to see some new fighters and stories from the KI Crew in 2018!
Happy New Year, everyone!

Speaking of “Sharkman”, it would be cool as hell if we had some sort of deep sea monster or an aquatic creature. I mean, Killer Instinct’s cast is cool as ■■■■. we have an alien whos body is made of ice and can control it, a sassy human torch, a werewolf, a cybernetic raptor, ninjas, skeleton pirate, and whatever the hell omen is…fitting a deep sea creature into that cast would be cool.

Speaking of “Sharkman”, it would be cool as hell if we had some sort of deep sea monster or an aquatic creature. I mean, Killer Instinct’s cast is cool as ■■■■. we have an alien whos body is made of ice and can control it, a sassy human torch, a werewolf, a cybernetic raptor, ninjas, skeleton pirate, and whatever the hell omen is…fitting a deep sea creature into that cast would be cool.

I agree, KI has the most diverse roster of any fighting game. The likes of which SF, Tekken, and KOF to name of few could only dream of.

and a sea creature would be genius!

I can see that @VenomousKeo329 & @justathereptile clearly have great taste, as you’ve both focused on the most important note of the entire thread: A brutal and beastly Sharkman fighter for Killer Instinct!!! 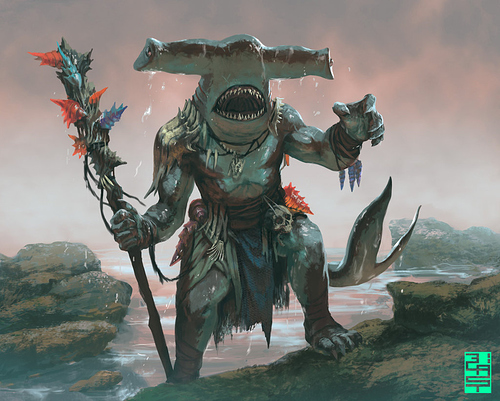 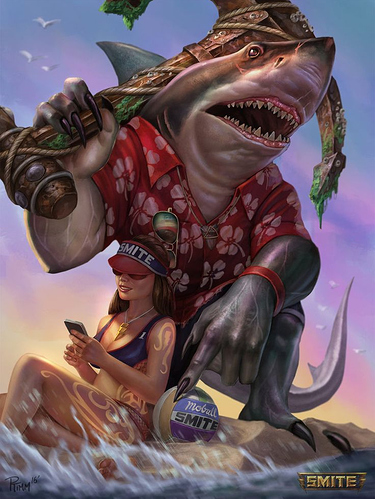 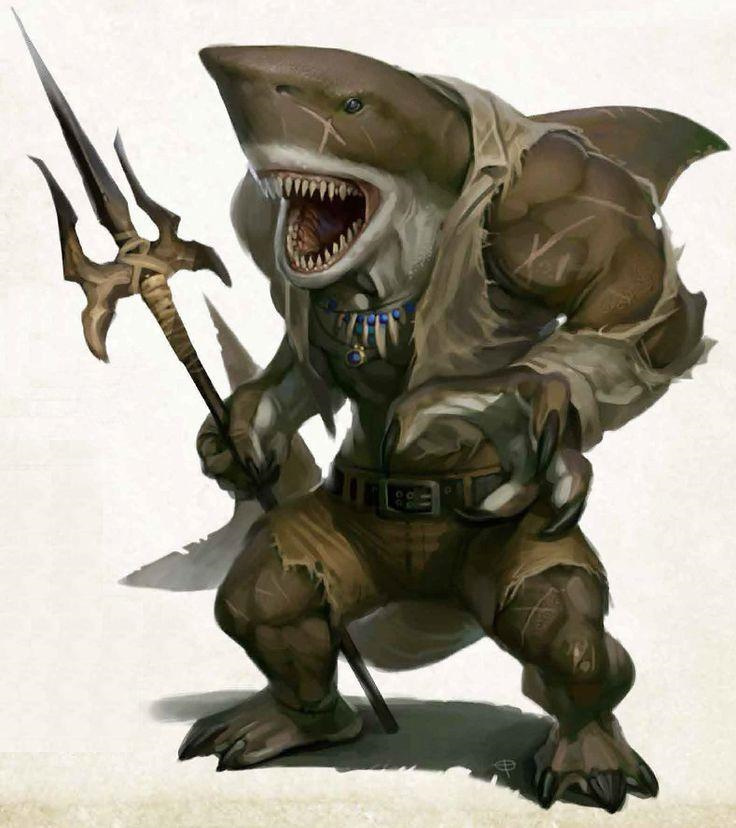 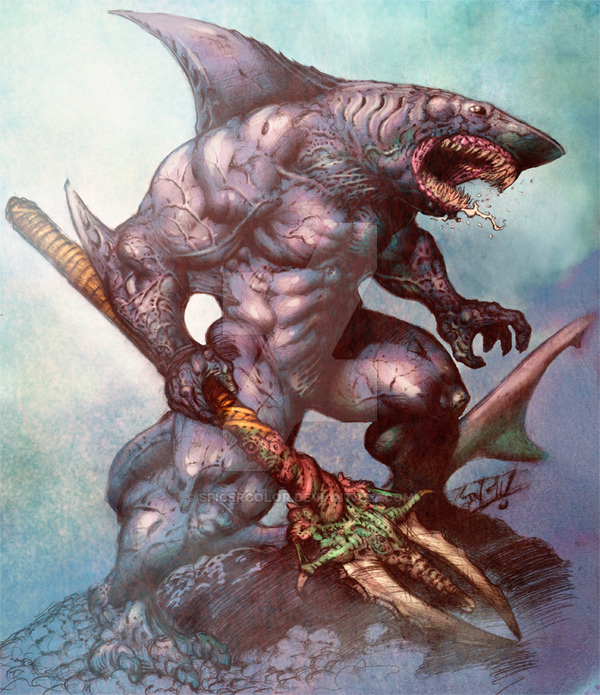 No joke, I’d be bananas if Sharkman was announced for fighter #30 to round out the roster- I’ve still got my fins crossed just in case! #Sharkman4Season4

The twist however is that this beastly shark also uses water based attacks to go along with his ferocity.
Like charging at the opponent like a spinning torpedo with water going around his body.

dude, those pics are epic. choosing between a hammerhead shark head and a great white shark head would be cool, and him wielding an anchor or a trident of sorts would be awesome! this makes me want him even more! 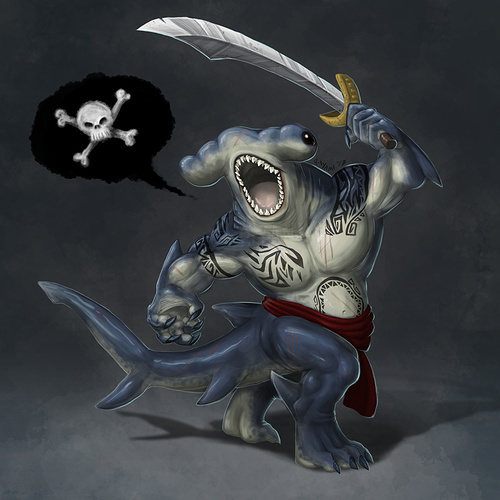 @justathereptile You know, I considered a projectile-ish attack that our Sharkman could effectively utilize, and here’s what I came up with:

I imagine that my version of Sharkman drools/leaks seawater from his gills and mouth (not pouring like a spigot, but more like a Sabrewulf drool/trickle to the point where you’d clearly notice it), as the toothy creature would take in an internal water bladder to make his land-based adventures and fights more comfortable.

That’s where Sharkman would get the waterpower for the “Tsunami Slam” – It’s a mix of Glacius’ Shatter and TJ Combo’s Tremor, where Sharkman would violently slam the earth below him to conjure an oceanic wave that sweeps the screen and ends in a violent apex a set distance away from Sharkman’s slam, depending on
the strength of the punch button used to input the move.

A punishing wave that hits harder the farther the opponent is away from Sharkman serves a dual purpose- not only would it goad runners to try their chances within our favorite fishman’s reach, it would let Sharkman do what comes naturally when he baits the waters for an impatient foe- bite, slam, crush, chomp, and crunch ‘em into chum!

@VenomousKeo329 I’m SO glad to hear that someone else would like a variety of heads and styles that are based off of different real-world shark species! I’d love it if KI’s Sharkman was a hammerhead by default, with accessories/alternate versions being a great white shark, a tiger shark (with bold striped patterns), and a hideous goblin shark as the “bonus accessory pack” respectively. How grotesquely fun would a nasty big-nosed goblin shark monster be?! 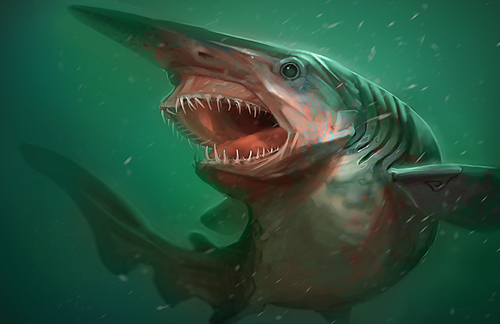 A Hammerhead Sharkman would be by and far a dream come true, but I’d be happy with just about anything if the KI Crew brought the concept to life!

Man, I’m so glad to read that you guys would be pumped for Sharkman just as much as I am! Here’s hoping that we learn about what’s next for the KI universe soon…