Not trying to start anything here, promise, just some observations I’ve really been wanting some opinions about…

I’m just shocked at the entire lack of support…

Am I missing something? Maybe things will change in the future? This is just the raw deal of Xbox?

Dont harp on a KI TE2. They are no longer being made and have been out of production for over a year. They did a small run a year or so ago after being down for close to 2 years.

Put your own KI art inside.

The KI TE2 IS NOT worth the money nor the hassle. the HPTCA (or whatever its called) flashing lights don’t even work! they never have, its a bogus lie to sale you on that version of the stick. they never installed the proper piece for it to work.

WHy do you need an adapter for a fight stick??? And sense when is Mad Catz not supported??

As far as fighting games, they have KI, Injustice 1 and 2, Skullgirls, MKX, Blaze Blue, and others Im just not thinking of.

I’m under the impression you need an adapter like a CronusMax or Brooks for a usual Mad Catz to work, and that’s an extra… I don’t know, $35-$50 investment or so.

Yeah Xbox has the NRS lineup for sure, BlazBlue is the older game not Central Fiction, Tekken T2 and 6 is recent thank god, no VF, GG, Persona nor obviously Capcom anything, although I think later this year Xbox gets UMvC3, but what about Infinite when it’s released?

It makes me seriously consider PS4 or Steam for all my non-KI fighting needs. And that’s fine, my choice, just wondering why it has to be the situation.

Your username looks really familiar, like maybe you beat my ■■■ on an online ranked match? Small world.

For the most part, Sony tends to buy up exclusivity rights with companies they have had good relations working together. While Xbox has had a lineup of modern fighters, Sony in an effort to stay competitive is really wanting to capitalize on this genre of gaming, to which it’s had a fairly tight grip on for many years.

Tekken 7 and MvC Infinite will both be launching on the Xbox One at the same time, no timed exclusive deals on those so far. Sony did buy a timed exclusive deal where UMvC3 launched months ago on the PS4, but the game will launch on Xbox One in March. So Capcom hasn’t gone completely exclusive to Sony consoles, but the Street Fighter franchise won’t be coming back for some time.

I think after Microsoft launched KI on Xbox One, Sony may have started to get a notion that MS may try to challenge them in the FGC support if the didn’t act, so hence so many exclusives. However, when it can, Xbox usually supports new fighters and titles as the come. When the remastered version of SF3 came out, there was no timed exclusive period for Sony to have the title to itself.

I think having a PS4 or Steam account for collecting the games you can’t play on the Xbox One is a good idea though. Personally, the anime fighters tend to do better on the Playstation consoles, so MS is probably going to pass on something they can’t get a return on for their investment. I don’t blame them though, I’d say KI is a good flagship title for their exclusive lineup. I’d rather them invest more in KI than chasing down anime fighters that probably won’t see much action anyway on the Xbox One. Even if they run better on Xbox One consoles, tournament organizers will most likely use the PS4 version.

They aren’t bad quality or anything, they just are a little expensive given that the only real difference between them and other TE2’s is the artwork really. That said, I did overpay for mine IMO, but I was not happy using controller to play, and is was SOL for any other option.

The lights on my fightstick do work though.

WHy do you need an adapter for a fight stick???

He probably wants to use a TE1 and use an adapter to make it work for and Xbox One console or Windows 10 platform. Some setups have trouble running old TE sticks on them.

Are you saying that I will not need an adaptor?

And totally off topic here, but what’s the best SF available on Xbox One?

If we met and i beat you dont worry, I get beat a lot. Prob more than I win LOL

trust me…get the RED TE2… I have one along with a custom made stick that I mainly use. the TE2 works fine…never had an issue.

Not the lights, the flashing lights that go along with the game sounds HPTAC switch up top near your lock switch.

The quality is fine, but its is not worth 500$ and chasing one down over a regular TE2…no way. I almost bought one and thank god the dude reneged on Ebay.

Dude…its less than 55$ at game stop right now! Well if you can find one in store…not available on line.

trust me when i say i’ve been prowing ebay for a couple weeks. ain’t no TE2’s selling for less than $100, so what the deal here?

It means if they have one in store its 56$

If you can some how find a Game stop with one in stock , thats the price you would pay.

It looks to me Madcatz isnt producing the red Te2 anymore. MAdcatz makes items in spurts…they make them, they run out…then when the demand is high again they make another batch.

Here is a decent deal on Ebay

And another deal for a HORI only $150

I just read about them randomly dying, and I don’t know anything about sticks yet to understand why or how to fix (the know-how and expenses) but on the other hand I read about some firmware update on PS4 immediately before a tournament being the issue, but then I also thought I recalled ordinary people at home having this randomly happen. So… when in doubt go TE2 has been my philosophy so far… unless you can vouch for the Atrox?

I know nothing about Hori. I want a good stick that I can mod though. I didn’t think Hori was as good as Mad Catz.

Some ppl love Hori and swear by it. Some Atrox. I cant vouch for anything but Madcatz Xbox Te2 and my custom built box by Stan the man. Both are great…never had an issue with the TE2 EVER and my 6 year old son beats the hell out of it!

@TheNinjaOstrich Dont you have an Atrox?

BTW here is my custom stick by Stan $400 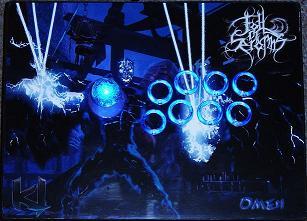 I do have an Atrox. What’s up?

Dude is wanting a stick but heard bad about Atrox. And curious about Hori. the Te2 is hard to come by right now as its out of production. He needs some help since the Hori and Atrox are his only choice at a decent price.

Atrox is good, but It’s restricted to Xbox. I have a Brook Adapter I use for PS4, should the problem ever arise. It’s good quality, and the buttons feel great. I’ve modded my stick to feel a bit more firm, but I haven’t had any problems with it. It’s good right out of the box.

Not sure about how it works on PC, as I don’t have a PC powerful enough to run KI. But it works really good on console.

He is running Xbox one so he should have no issues. No need for a converter. You can remove the art and place your own correct?

You can remove the art and place your own correct?

Yes, it’s fully moddable, and easy to implement. It’s a pain getting artwork on there compared to other sticks, but it’s Worth it. 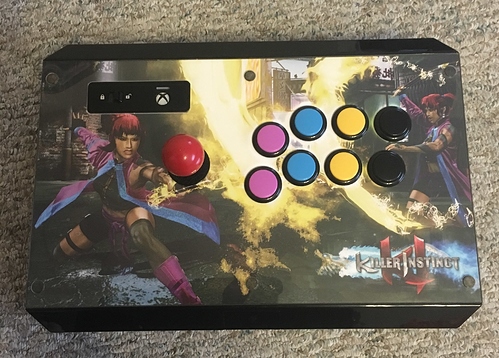