I had a little fun with the decal machine at work today. :3

This was the result!

My car is now a KI swag machine! I would love to give these away. They’re cheap and easy to make.

Pretty awesome, wish I had some. As far as distribution I’d think they would be fine to give away.

I think so too, as long as no money is made.

Yep. Giving them away is a-OK.

ha ha… I used your KI paint job on Forza Horizon 2 months ago. I have a half KI / MK Black Lamborghini.

Id love to have a KI sticker. Too bad you are so far away!

I’m gonna mail these around. Starting in October, I’m gonna do one of those RT to win things on Twitter. Or for those not on Twitter, I’ll do a comment to win on my Youtube channel.

ha ha… I used your KI paint job on Forza Horizon 2 months ago. I have a half KI / MK Black Lamborghini.

Also, I just noticed this. Can you send me a picture? I would love to see that!

That’s a cool a idea. I’m actually doing something similar but it’ll be the KI logo and the character insignia’s of Gargos, Omen, Shago, and Jago on 16" x 76" steel plate for a fire pit.

I would love one

My Xbox One is busted. I won’t be able to view it

Yeah, I really want to see that too!

I’m not sure if it’ll be burned onto a plate but I’m drawing out the design for it as we speak. Hopefully my boss will let me burn it, if not I could take it to my old professor and laser print it on a wooden piece instead.

I took a quick pic of it, it’s not finished yet but just to give you a sense of what I mean. 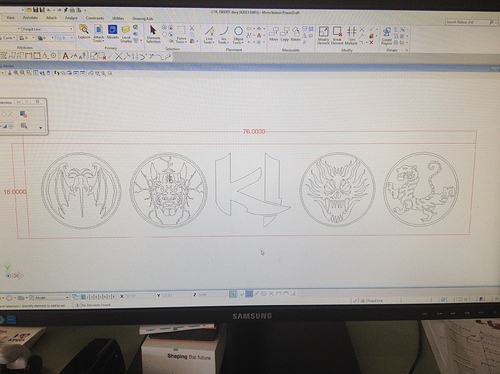 Yo, can someone get me the Cinder emblem? That would be AWESOME!