Wild Prediction on S3 relating to the current news 2/19

So we recently got the bad news of Season 3 only having 3 stages. I’ve been going through the current news post section, where many of you have posted your dispair. Reading through most of it, I came across some few details about Ultimates and Stages that Adam Isgreen and Rukari gave in a low key manner.

Many of you posted your huge disappointment towards the news and started to question everything. So questions started popping up about ultimates. In one post that Rukari made he stated that DJames had already answered the question. 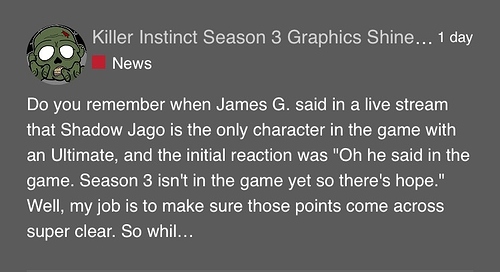 The next topic is regarding the 3 stages for season 3 which they have clearly stated is not a troll. My thoughts are that we have only seen 1 stage which is Kim Wu’s because of what Adam stated recently 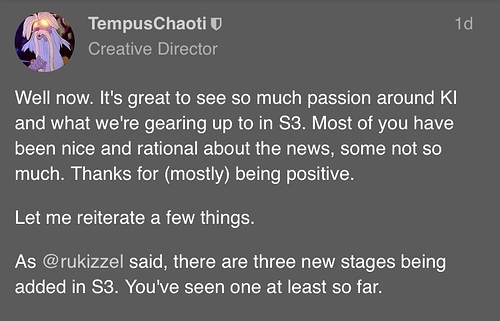 Adam stated that we have only seen 1 stage which means that the teaser of Arbiter was not his stage but part of his story/arcade mode cutscene. So my predictions on who the 3 stages are going to be for are Kim Wu, Tusk and Gargos since he would be the boss fight. Please give me your thoughts on my ideas and thanks for reading.

Sorry for the missing text in the photo regarding ultimates. He continues saying that he is not confirming ultimates for season 3 but that there might still be a slight chance and pretty much says he can’t give info on that just yet

I think basically they had to make sacrifices for other areas not mentioned for Season 3. There is no way you could persuade me that the stage in the Aribter isn’t for him though. They may make the stages a little different “meaning day time on the character for 1 character and night time for the other” but I’m willing to bet that some of the Season 1 and 2 stages will be shared with the Season 3 cast as well as the 3 new stages.

“least” is on a spectrum where it is the minimum. if ONE is the MAXIMUM then it can’t also be the MINIMUM. la~la~la~

There will be only one Ultimate int the game, they confirmed this more than once.

They also confirmed that we have seen two stages: Kim Wu and Arbiter. 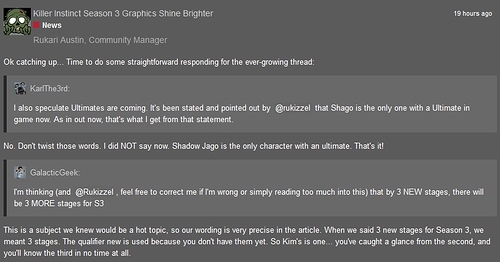 You’re welcome for getting that answered, BTW.

Wow… There goes my hope for new ultimates smh… And i dont understand, if your’e only gonna add 3 stages, why give one to Arbiter - the guest character? I would think like the OP: Kim Wu, Tusk and Gargos - where maybe Gargos and Eyedol share a stage… Idk, I dont get the thinking there… Plus I’m guessing that only 1 out of the 3 stages has a stage ultra… If that… smh… Giving a stage to every character for S1 and 2 and then only 3 characters for S3 will just make S3 seem incomplete I feel. Almost like a Season 2.5 instead… Idk, hopefully I’m wrong about that…

On the bright side though, a total of 21 total stages is really great for a fighting game. So there’s that. And perhaps we’ll get ultimates for everyone in the future… I just really hope that the new additions in S3 will overcompensate for its shortcomings

If we’re not getting Ultimates and only 3 stages, there better be a very solid consolation prize.

There’s no extra game that comes with the Ultra Edition of S3 either. I’m getting the feeling that S3 will be much lesser offering than S1 & S2.

Well it’s being compensated by the price of 5 (give or take) stages as well as the lack of a classic game.

So yeah, it needs to be pretty solid whatever they’re doing.

WHAT! NO! That’s not what he meant at all. He meant that at the World Cup James said “There are no ultimates in Season 3” and everyone thought he was playing with words and everyone thought there was still hope. Rukari is saying that he doesn’t want to be misunderstood like James and when he said only 3 stages THAT’S IT. He isn’t playing with his words, he has said multiple times he wouldn’t joke or try to beat around the bush. 3 Stages that’s it and he also mentioned no Ultimates because people like you keep thinking they are hiding something even though they are telling you multiple times no Ultimates.