Which Would You Rather?

I made this prediction a long time ago but I always had a hunch that there would be a bonus DLC character by the end of year for Season3. With @BlitzedKraig tease saying they have been working on a bunch of stuff that we will get to see soon via the latest textural stream from a couple weeks ago I think a character isn’t far from reality. Last year we got Shadow Jago in December so I could see it happening again this year.

I would assume it’s going to either be Shadow Orchid or Joanna Dark both of which have been mentioned several times throughout the season as possible characters going forward. Assuming I’m correct, which one of these would you rather see. Also please answer while keeping in mind the fact “neither” is NOT truly an option as the question is which would you prefer to have over the other.

Since I’m the one who made this poll I’ll just say I’d prefer Joanna but Shadow Orchid would be cool too. More waifus the better 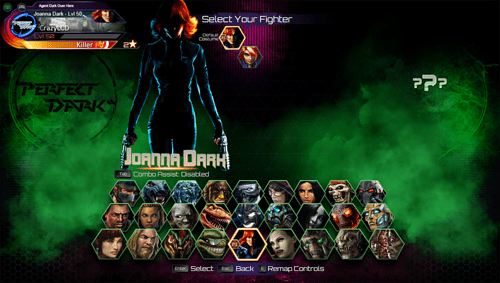 Joanna Dark, because that would bring more eyes to the game. Much like the Battletoads, her nostalgia factor coupled with the news of an age-old FPS character is making a return in an FG (from a well liked game, too) would catch mpre attention than a Shadow version of an existing character. That her gameplay will be based on guns, I’m not too sure of but IG have made each guest character work with their systems.

Atriox was another though I had (from Halo Wars 2). That game comes out February 21st next year, he was mentioned in the survey and it seems more likely to be the choice for cross-marketing a bonus character.

Preferably I’d go with Joanna, however the idea of transforming Orchid into the second shadow character, I think could have some potential.

If Shadow Orchid does ever happen, I’d like her theme to be a death metal remix of “Touch Me and I’ll Break Your Face”

But if I MUST choose, Johanna. She seems like she’d bring more variety, than a Shorchid.

If it was a choice of one or the other and not neither, I’d prefer Joanna Dark to Shorchid. While I do understand the appeal of Shadow characters, I’d much prefer each character to be their own thing. The fact that we got Shago changed to a different character is great, but I’d like to avoid those if possible.

Considering that they hinted in the last textual stream about having shadow skins for every character I honestly don’t see a shadow Orchid in terms of a brand new character being a separate character like Shago is.

As far as Joanna being in the game…eh…perhaps. I’m not going to get all bent out of shape if it never happens, but if they do put her in, I only have 2 words in regards to her:

If they were to go Gun Kata, it’s a 100% I’d have to Main her, because I play Noel Vermillion from BlazBlue, as well as Naoto Shirogane from Persona 4: Arena Ultimax, which are Gun users.

Noel is probably the closest to Gun Kata though.

If I have to choose, Joanna Dark, period. No more shadow/Clone characters please

I know that Shago is not a 100% clone, but I would prefer a totally new character

Everybody always overlooks Mira as pretty much being a Shadow Maya, but she is another good example of how the “shadow” characters in this game are so dissimilar to their original.
I agree though, I don’t want a shadow Orchid either.

I’d rather have a brand new character than Joanna, and we have absolutely no need for another clone - granted Shadow Jago now at least has his own moveset, but I have no interest in a second variation on Orchid.

Joanna was my choice. I would have much rather had her than Rash…

However, I would absolutely love a new character that uses a whip as their weapon of choice, much like Ivy from SC series.

In before Orchid gets a Joanna accessory set and everyone looses their minds.

I want everyone to stand out, so more shadow characters is counter productive to me.

so team Joanna of course!

Grumpy people with “neither.”

Also, I think it’s a HUGE stretch to say because they are working on lots of stuff that means there will be a new character.

Anyway, I would vote for Joanna. I would be more interested to see what they do with her than a Shadow Orchid.

Hate to reinforce with a negative, but I gotta go with my gut. Neither, I never played the original Perfect Dark, but that Xbox 360 version ruined me on it, so I don’t have any real attachment to the character.

As for Shadow Orchid, I’m with the no more clones audience. Kinda why SF4 gets some of a bad rep, given how many character’s play a similar attack pattern to Ryu, and why the final new character looks too much like Cammy. Seems lazy towards character and battle design sometimes. Shadow Jago never really struck me like that, since he plays so fundamentally different from Jago.

You know as a throwback to pre-KI development stage stuff they could take the idea of a “Shadow Orchid” and call her Roxy Rave.