I own both, and they’re both great. Really it’s going to come down to your budget and preferences.

The Hyabusa feels a little harder/more solid. It has proprietary buttons and stick but the Hori sticks/buttons are quite good. Occasionally you’ll find one with buttons that need some breaking in; simply solution to that is beat the crap out of it whiel you play for a week or two and they should straighten right out. I also own this stick for the PS4, it is also good. The door to the cord compartment sucks, but that’s not part of our gameplay, just a nitpick. $150ish.

MatCatz TE2 comes with a Sanwa JLF stick and Sanwa buttons. They feel quite nice and appear to be plenty sturdy. The bottom of the MadCatz is way more comfortable in your lap than the Hyabusa, however the TE2 weighs significantly more. The plexi on the top has a little “give” to it when you play, you may or may not appreciate that feeling (I don’t mind it). Easy to replace parts/mod on this stick due to the top doubling as a hatch. $200ish.

I have the TE2 and can confirm marbledeckers assessment of the stick. I’d add that I’m pretty aggressive with my peripherals in that I ride the gate with the stick and slap the buttons hard. My stick is the KI edition from when the game came out and it’s still holding strong.

One criticism I have of it is that it does not work correctly on PC which is annoying. A coupe of the buttons simply don’t function and I’m not sure why. I have a xbox1 padhacked hitbox that works seamlessly with PC so I’m not sure what madcatz did differently with the TE2.

One criticism I have of it is that it does not work correctly on PC which is annoying.

For PC I use a Qanba Q4 I picked up for $50; swapped out the stick and buttons for Sanwa, and it now plays like a dream. A little small but formidable.

Ok, @Marbledecker Now I’m throwing a curveball at you.

Like I want to be able to beat it up, and still work great. Kinda like a Sturdy Arcade machine, built for rough play, and will still work with hard inputs.

(Because If I switch, I got to get past the Input Smashing Phase

Well… both the Hori and the TE2 feel pretty sturdy, but I’d say that the Hori feels like it could take more abuse.

As for the stick/button preference… without going into too much geeky detail, I’ll say that a Sanwa JLF with a 2lb Semitsu Spring and an oversized Kowal actuator is my favorite stick setup thus far (though the Sanwa JLF does not come STOCK with these parts, they have to be installed… thankfully, cheap and easy). Out of the box, I like the Hori stick better. As for buttons I like the Sanwa buttons over the Hori Kuro buttons, but not by a long shot whatsoever. The Kuro buttons are actually pretty great. Semitsu makes a fine button as well, I have two of them in my wife’s Qanba Q4 and they’re lovely.

Stop it! You’re killing me.

you know what I mean.

Stop it! You’re killing me.

you know what I mean.

What have i done o_O

What have i done o_O

Potentially helping someone get a fightstick. I’ve had my eye on one for the longest time, but I don’t want to go through the struggle of learning one, if I’m already good at Pad.

Plus, you might have to get used to the Gifs and such. I use them as jokes and to help get my point across. lol you can ask anybody.

I think unquestionably Sanwa makes the best buttons for arcade sticks. I’ve played on a bunch of other types and they all feel worse in one way or another to the Sanwa ones. Seimitsu are probably second best (and you might prefer them if you like stiffer buttons).

I really wish the new Madcatz sticks weren’t so expensive (and, also, less functional than the 360 ones), otherwise I’d own one. It feels like a downgrade for more money just so we can bypass the software lock on a USB device.

I think unquestionably Sanwa makes the best buttons for arcade sticks. I’ve played on a bunch of other types and they all feel worse in one way or another to the Sanwa ones.

Does a Madcatz Street Fighter X Tekken have Sanwa buttons? That’s the one my friend uses, and I like those buttons on there. If I ever get one, I don’t want a button to break due to me smacking it too hard.

I really wish the new Madcatz sticks weren’t so expensive (and, also, less functional than the 360 ones), otherwise I’d own one. It feels like a downgrade for more money just so we can bypass the software lock on a USB device.

What do you mean by this? Is there less functionality in the XB1 Ones? That’s not cool. I would think if you make a better product, you keep everything that was great on the last one, and improve on it, or add stuff.

As far as I know, every Madcatz stick ever made has Sanwa buttons. This is the main stick I use (I hook it up to my XB1 via CronusMax).

The Xbox One sticks took some features out, yeah. There’s no more headset jack, and you can’t toggle the functionality of the joystick between left stick, right stick, and d-pad. I also think more people on average have had issues with their Madcatz XB1 TEs as well… the PCBs seemed to be a bit flakier on their first few build runs (maybe a byproduct of the new console at the time). In general though I think Madcatz made the best sticks in the 360 era… since I don’t own a next-gen stick I can’t really speak to how the build quality has changed, but you’re probably safe with them moving forward.

Niether…get a custom stick from Stan the Man… i can send you the link if you like.
I have a Madcatz…its good…but its NOTHING compared to my custom stick! 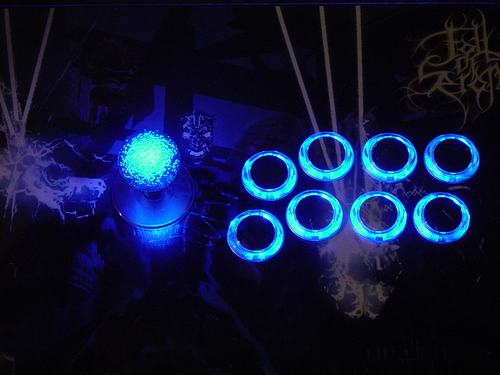 that’s what freaked me out XD

That is pretty dang awesome!

Hey video gamer's, video games for life! My channel shows you what i do part-time in the video game industry. My favorite genre is fighting games. I've been ...

You can get a head set plug in, xbox and PS compatibility, or any system or all systems…up to you and how much you want to spend.

clear on the bottom so you can see all the lights and tech. You can get light coming through the art work, buttons ect…

its the sheet man

I own a Razer Atrox. A little disappointed how it is getting so much hate because of the incident at EVO with a last gen stick. Either way, I’m not a fightstick user so what would I know right? I mean it feels right though, just need to adjust also - there are a lot of cables and screws that are attached but can easily be removed to swap so customization right?

I’ve actually heard mostly good things about the Atrox until that incident. I think its getting a bad rap. We can’t honestly expect every stick produced by a company to never fail… it just so happens that this particular failure was in a high-profile environment.

I’ve seen my friends’ Madcatz sticks die. It happens because hardware is not perfect.

Sucks for Razer that it was during the grand finals of Evo, but it’s not unique to them.