What's the big deal on not having Guest Characters?

KI is becoming a good example of that. Every guest character is going to be from either Rare or Microsoft. I would put money on it.

It means less original characters. Personally am not a fan of the guest characters they’ve announced so far and my favorites in the game have been new comers like Sadira and Hisako. To me it’s just a take away of potential characters I would want to play. Plus these guest characters have nothing to do with the story and won’t even have a chance of coming back the next game.

Unless Skurge is announced, I won’t be interested in any guest characters from KI.

Guest characters can be fun, and it’s interesting to see how a character from one franchise can be made to work in another; but I feel that they are lower value to me as a fan because fighting series typically do not bring the same guest character back for additional games because the guest isn’t part of the lore. Because the devs have specifically stated the KI guests aren’t going to be worked into the lore, I’m also questioning whether they will have a story mode to play through.

Original characters are brand new, and it feels really special to discover the background, fighting style, and story surrounding the character, and although it isn’t guaranteed, learning to play someone like Aganos or Hisako can have continuing value past KI13 because they can conceivably return in KI 4.

Learning Rash or Arbiter could be a lot of fun, and I’m looking forward to playing them both occasionally, but what I learn playing them is unlikely to benefit me when a sequel rolls around.

Good pointers so far in this thread. My personally I don’t mind as long as they aren’t part of the original story cough Dead or Alive cough

I believe if we get around five guest characters however, then it’s time to draw the line.

I don’t have a problem with guest characters, its just a matter of if I like said characters or not lol I love all of MKX’s guests because I just happen to be a huge fan of each franchise those characters come from. Rash I had never heard of really until he was announced, but I still think he is really cool and looks fun. Arbiter and other XB exclusive shooter characters I could do without though, mainly because I know little to nothing about them so I personally don’t really care about them and would rather get a new KI character lol

So yeah, for me its just a matter of if I like the particular guest or not.

And in terms of gameplay they are all new characters.

The only thing that is already set in stone is the design. They cant go nuts with it.

My opinion if we get 8 or 9 characters every season I think 2 per season would be pretty reasonable.

The way I see it, at most Season 3 has 3 available spots for characters (the other 5 are filler by Rash, Kim Wu, Arbiter, Tusk, and Gargos). And if the other spots contain another guest, the sibling character, and Eyedol, then there is no room for more than 1 new character. The sibling is confirmed, but the other 2 spots are still open and I hope they are not filled by another guest and Eyedol. I like the new characters the most & according to IG they are the most fun to make.

Definitely would have rather had new characters than guest characters. Old KI characters should take priority over brand new ones though, so Gargos and Eyedol should be the final 2. Then if there’s a season 4 we can have a full season of original characters.

i would usually agree with this but its not true in IG case. They have done such a good job with arbiter hes not more out of place than a huge rock with trees growing out of him (Aganos)

ANYWAY! Guests are good for Killer Instinct! Yall moaning about advertising and getting new people to play this game… Well look at the numbers bellow. Ive added Cinder the most anticipated KI character since the games launch just for comparison.

Guests are GREAT for this game: 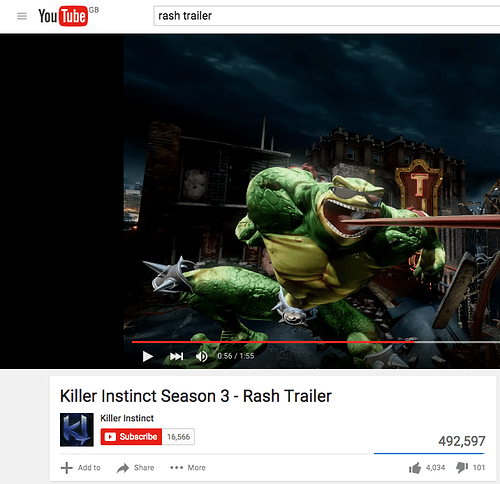 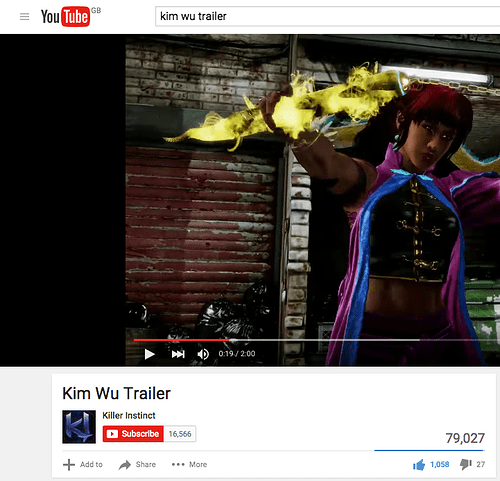 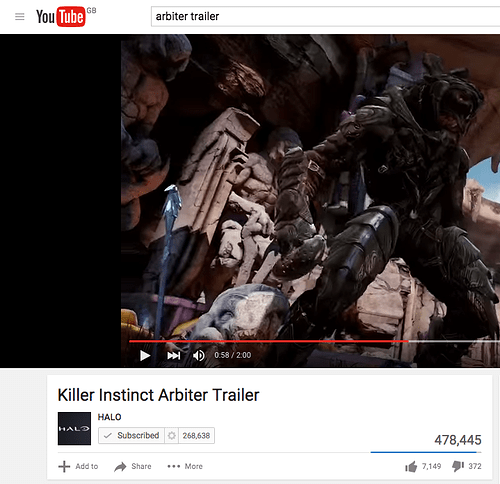 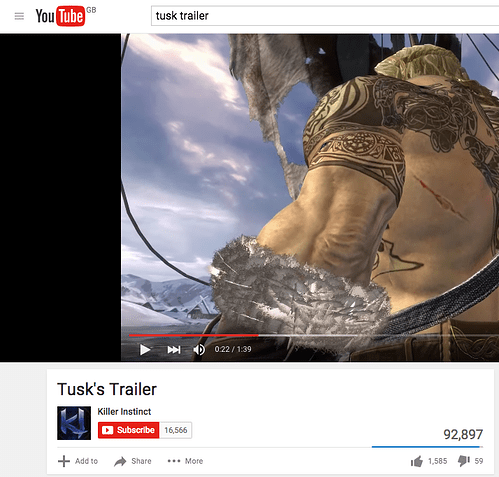 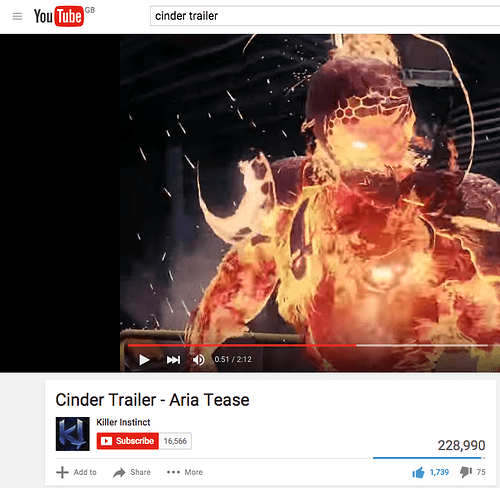 I’m in the same page as Wanda. I would love for more new characters, but guess characters are fine as long as the gameplay is new and interesting. They also help bring new players to the game. People here seems to forget that MS/IG are running a businness that needs to pay their employees.

The Rash trailer is 7 MONTHS old.

And the arbiter trailer was shown on multiple streams and channels.

Neither of these are fair.

The Rash trailer is 7 MONTHS old.

And the arbiter trailer was shown on multiple streams and channels.

Neither of these are fair

UUURRRMMMM thats the whole point!!! Cinders trailer is over a YEAR old and it hasn’t even scratched RASHES trailer. Not to mention he was the most anticipated KI character (possibly of all time)

And multiple channels? Of course… ISNT THAT THE POINT!?? You want exposure for the game? Thats what Guests characters do. New characters are going to be shown or covered by lots of different channels.

its completely fair! Outside of this forum not as many people are very bothered by KI characters, they have a limited reach.

Sorry for you to hear that. lol

This is why Guests help us gain players specially as a free to play game also.

that idea coupled with Gears4 release this year and need i say more?

Its not that people dislike guests I don’t think, but the overbearing presence. Rash and Arbiter were fine, a Rare rep and a MS rep.

You-know-who is pushing it, though, and I’d wager there’s another Rare character in the pipeline. Kameo, Banjo and Kazooie, Joanna Dark, Sabreman, could be anyone. That’s potentially half the roster. I personally really liked the new S2 characters and was hoping for more of that.

I’m in the same page as Wanda. I would love for more new characters, but guess characters are fine as long as the gameplay is new and interesting. They also help bring new players to the game. People here seems to forget that MS/IG are running a businness that needs to pay their employees.

Seanon 3 was weak with KI content even before development started.

This forum was full of multiple posts saying how they thought that Kim, Tusk, Eyedol and Gargos wasnt enough to hold up another season on their own.

We have to think of the BIG picture.