What is your max damage?

So I want to know the maxed damage you have ever done in KI. This can be found in stats. Here is mine. If anyone can beat it,I will be suprised. 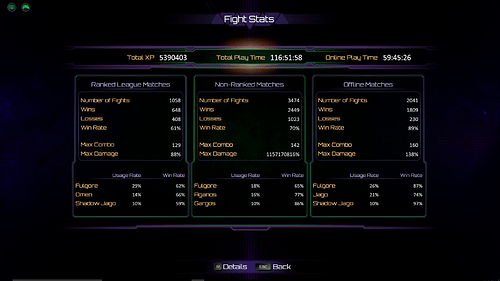 Oh, I know that. I meant his absurd non-ranked number.

Well, I did 2 shadow linkers and an instinct cancel combo as Aganos before punching someone through 4 walls and the damage capped out at 99. But it was in practice. Being an Aganos main certainly makes getting these high numbers easier.

I’m guessing the OP used some sort of really long combo that took most of the life-bar, if not all of it, and then started an infinite ultra and kept it going for a very long, and boring, time.

Nope. I just checked my stats and it was there.

Nope. I just checked my stats and it was there.

Well, it’s probably just a glitch then. Check back later and see if it’s still there. For all we know, it might be a temporary bug or fix itself.

I got 99% with RAAM in ranked. His instinct is too good.

Obviously your Unranked is some sort of glitch lol