What a difference 20 years makes

Funny thing, I was just looking at the Season 3 pricing post, and noticed that KI1 and KI2 were rated ‘M’ by the ESRB. Now that doesn’t seem weird at first, seeing as those games did have some pretty violent things in them…but were they always rated ‘M’? 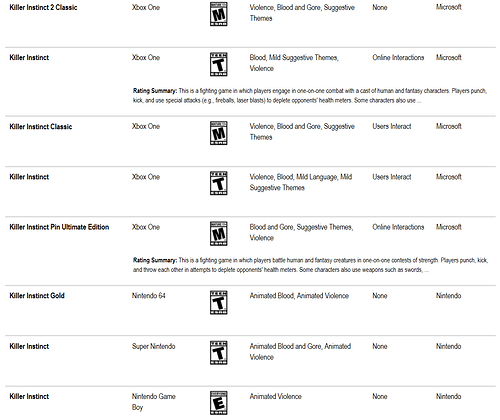 Not sure if this has been pointed out before, I sort of think it was talked about back on the old forums, but I just though it was a funny “fact of the matter” type of thing.

Now, I know that MS has stated that they don’t want to make KI an ‘M’ rated game, but could MS push the ‘T’ rating further if they wanted to? Or has the ratings scale in such a way over the years, that what may have been considered ‘PG’ back in the day, is now considered ‘PG-13’ or ‘R’ now?

To be frank, KI should have always been rated Teen, it was never a game that I saw as, “oh my gosh my mom would kill me if she saw me playing this, better hide it” type of status. I played games like Hexen, Duke Nukem, and Conker; but never felt KI pushed that line too much. You could argue ultimate a but they were never as gruesome as fatalities. So seeing it as rated Teen doesn’t surprise me, I don’t even know what made it rated Mature in 2013.

Also, you have a point about things be upscaled from the past. I remember a time where b*tch was incredibly forbidden but at one point it was okay to use in media, I think MTV capitalized on this. Same with a$$ and damn and so on. So in 2016 we do see a lot more of what would’ve been considered PG-13 or even rated R.

A fair example would be with Minecraft The Story, it is clearly a game marketed towards kids and already attached fans of the Telltale series. In this instance, the game is rated E but they use words like H. E double hockey sticks and damn and so on. I may be a bit traditional here but as a kid, I would get a mouth full of soap for it… Which I would probably try and eat.