So is it similar to say…

Kan-Ra and Jago? They speak English, but certain moves and abilities are spoken in a different language? Or more of just a mix, like you stated?

Thanks for another scoop @TempusChaoti! Wondering how old was the preview we saw at KI Cup…

Will this be in intro and outro or just when she’s fighting?

Tbh,I hope you can choose the language. 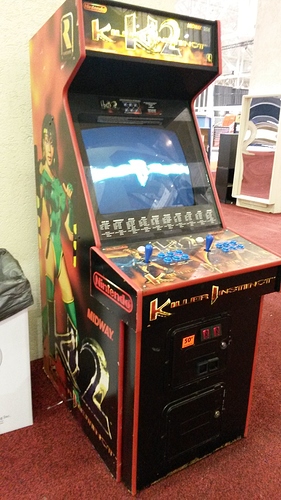 Found this old gem at the local IX Center in Cleveland Ohio at the Auto Show. Why are you stalking me KI?

The Dream is Dead. They probably just played Arbiter.

I think maybe Phil’s definition of “huge announcements” is probably along the lines of new games. Whereas all we need is details on S3. Which I’m sure we will get.

Rukkari already said he has huge amounts of work to do before 6AM PST tomorrow morning; the time when the blackout ends.

Their “announcement with fans” is going to happen tomorrow morning.

Ok I need some clarification. Tomorrow, 4PM CST (which is exactly when I enter class, where I live

) will be the Arbiter Gameplay. Ok. So how exactly are we getting the info about S3?

a) in the stream;
b) at another event I’m not aware;
c) by an article here on the forums;
d) all we are getting is the gameplay and the understanding that we were getting S3 info was all a massive dream from us all;

Can someone help me with this one.

Keep watching this in anticipation

Do you live near Cleveland?

How many hours till they can drop the fab 25th info?

Thanks, in Europe never quite sure if I convert the American time right…assumed it would be lifted 30 min ago…

I use http://www.worldtimebuddy.com
Set your home time and add the us time zones.

Are you sure? That will be 9:00 AM on the east coast EST. I would have expected a Pacific Coast (PST) time since MS is in Washington State.