Watch out for scam!

I have no clue what this is about, and i did not text them, but be on the look out for this. 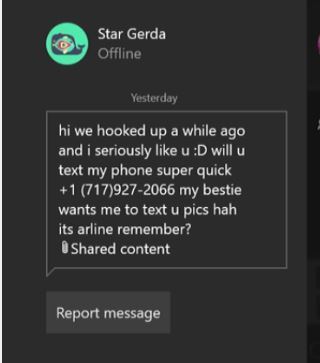 I have no clue how text scams work, but i would not recommend interacting with these people.

The profile is fake. 0 Gamer Score.

I searched the phone number, and i found that it is a “reported” number. Dont know what that means, but it dont sound good.

#Heres where things get strange!

Was a Clip by UL ZergKiller!

Again, i have no clue what it means, Maybe it was a thorough attempt to pretend like she is a mutual friend of mine and Zerg’s, but be careful.

Any idea what i can do to help? (other than report the message?)

@TempusChaoti Would it be too crazy to think that maybe you could help with this? Push a console ban or something?

I’ve gotten tons of follows/friend requests from people I don’t know who have little to no gamerscore and no recently played games. They just get on an add a bunch of random people.

I just mute/block them and go on my way, since there isn’t a report button for spam. I try not to worry about it and let them talk to a firewall and look dumb. Just like telemarketers.

good to signal it

Got 1 of these last night with a friend’s clip. I immediately reported the message as well as the obviously fake account, and blocked them as well.

The system works great if you use the tools, which sounds like what y’all are doing.

When I report a scam profile, what happens?
Profile ban?
Console ban?
Please honestly tell me so that I can have some faith that I’m REALLY helping by reporting people.

Had a few of these messages but the award for stupidest con man ever had to be a phone call from a man claiming he “represented MS” He went on to say that I had a virus on my PC and that I would need to logon give me details etc.

When I report a scam profile, what happens? Profile ban?Console ban?Please honestly tell me so that I can have some faith that I’m REALLY helping by reporting people.

All of the above, and then some - the XBL policy enforcement team (or PET for short) will likely block the IP too. You will also likely see an automated message from Xbox Live some time soon thanking you for your support (and report) and making XBL a better place.

I got one of these too. I blocked them, and went about my business. I know it’s fake…

Because I don’t have a girl that likes me in the world. Nor a girl I know named Arline…

So you been watching pornn on your Xbox too! LOl… just go out an admit it why don’t you!

No, I can get girls if I want to, Most of them are taken, or they are with a Jerk guy, and don’t like “Nice Guys.” Plus, where I live, there isn’t much of a population.

What man says “if I want to?”. Get out there and get that pussycat! LOL JK

LOL If it were only that easy! XD But, nah, I’m not that type of guy.

I…
Dont even know what to think or say…
About how my thread has turned out…
Im just going to abandon now.

Young bloods watchin ■■■■ on the X1 is like hitting the training lab in prep for the real game! Lol. Gotta learn them shadow counters and find ways to give her the triple ultra! LOL

I got one yesterday. A message saying somebody added me and they had 0 Achievement points and had not played a single game lol