Is it just me, or did he skip leg day? 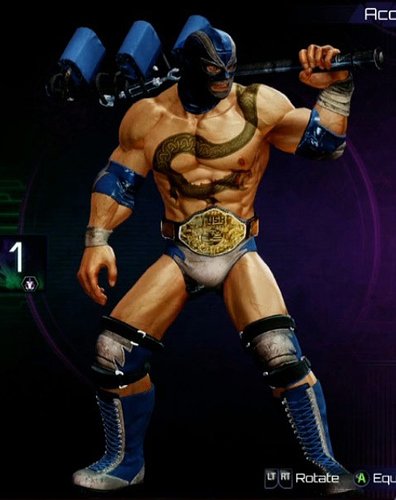 Something tells me his thighs are larger than your head and could crush it between them. The rest of him are just larger.

I think it’s just the lighting, I can still see muscle definition.

You know, I hear people say " Humiliations wouldn’t work. They don’t fit the more serious tone of the new game"

Everything about this is just so damn bad … Lol they really have made such awkward accessories for this game.

That costume is awesome

A masked wrestler with a fricken turnbuckle for a sword… Name me one other fighting game where that’s actually a thing.

No but seriously, is this the only game that has this? I don’t remember any WWE games allowing for that kind of awesomeness.

Closest thing that comes to mind is Beowulf from SkullGirls, but I’ll admit that’s probably stretching it a bit.