Has anyone completed them yet? For some reason, I’m locked out of the 6th mission. I have no idea what the “requirements” are. Any ideas? 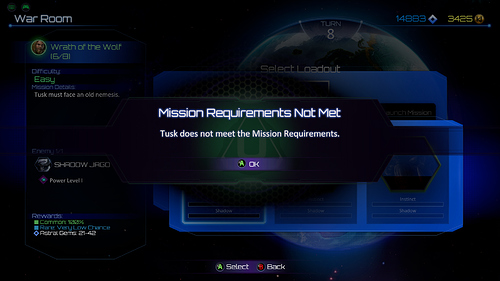 I think you have to finish his old missions first.

I already have, before these new missions were released. The first story mission that popped up in this Tusk playthrough was Wrath of the Wolf 5/8, so I can’t complete the previous missions in the story now even if I wanted to.

EDIT: I skipped that turn and went forward about 2 days. Mission 6/8 came back and I was able to complete it. Weird bug.

Well I don’t know it could be a glitch or something else.

Try reporting it in the bug thread. If you say what the bug is and how to reproduce it, there is a good chance they will look into it pretty quickly.

So I completed missions 5 through 8, which came out in the 3.7 patch, which I very much enjoyed, but I was wondering…

There were two cut scenes in missions 5 through 8. Are these videos available anywhere? I looked under Tusk’s dossier list and they’re not there.

Also, unless I’m mistaken, aren’t there dossiers for missions 1 through 4 in this quest line? Are there no dossiers for the new missions that came out in 3.7?

Again, I enjoyed the missions, but it seems odd that there would be no way to go back and look at this story stuff again when you can look at stuff for missions 1 through 4. @rukizzel do you know if this is something that might show up in a later patch?

Also, I had a question about the end of mission eight, so spoiler warning since this just came out:

When I defeat Kim Wu and Hisako, it gives me the choice between having Kim Wu, Hisako or Hisako join my team. I picked the middle option, which was Hisako. But she never joined my team after the round was over. The text just read something to the effect of “Hisako will be a valuable ally going forward,” or something along those lines. I’m guessing her not joining my team is a bug? Did anyone select Kim Wu? Just curious if something actually happens here depending on which person you invite in to your party.

I did and it did the same as you described nothing, it probably means that if they add more missions for him it’ll require you to have the character you selected to continue his quest or it’s a bug.

I did and it did the same as you described nothing, it probably means that if they add more missions for him it’ll require you to have the character you selected to continue his quest or it’s a bug.

That makes sense. Seems odd though that the dossiers for the old missions showed a “1 of 8” for the quest and we’d have more than 8 missions in it, but I’m sure that can be changed if it goes above 8. I hope they put dossiers and the videos in Tusk’s missions 5 through 8 in his character archive though. I still think it’s kinda strange that they didn’t do that. Maybe they didn’t have time?

Same experience as you and same issue with the double hisako in the join options.

Me, it doesn’t work cause you do fight Shadow Jago… With Shadow Jago on your Team, that’s the point. Atleast it was in my case… Otherwise wait for it to pop up again, hope i could help.