very informative @BigBadAndy, its always good to learn something new and when its put in the layman’s terms for us guys not in the scientific profression. very interesting, and i suppose this lays to rest my imaginary fiction of an unknown horror emerging from the depths of a clandestine govt bio warfare facility lol

very informative @BigBadAndy, its always good to learn something new and when its put in the layman’s terms for us guys not in the scientific profression. very interesting, and i suppose this lays to rest my imaginary fiction of an unknown horror emerging from the depths of a clandestine govt bio warfare facility lol

Oh, its gonna happen im sure.

“Let me just put this dangerous chemical on top of this counter, close to the edge with the other chemicals and dead tissue…It will be ok.”

or maybe they’ll go down to the yucatan peninsula and at the bottom of a lake they’ll see a strange twisted and forked rock formation. it will be given the nickname “the tail of the devil”. then when it is excavated at the cost of human life its revealed to be a Black Marker of unknown origin. however its effects on people are horrifying and they start seeing the ghosts of their loved ones long dead. people start losing their minds but when that chemical is dropped with a sample tissue of someone dead we get…NECROMORPHS! wait…isnt this from a game? lololol

Just as long as I get Ellie Langford by my side

Hey dude FYI the sample of the crazy guy at the beginning is real! that’s a real clip that the Faceless used for this song. You can listen/ watch the original clip on YouTube somewhere. Dude is nuts, they dont know why he made this recording or phone call but its legit.

are you serious?? LOL that is awesome! i think its just a lunatic going on a rave, but you never know…think about it. are we completely and truly alone out here in the universe? i dont think so. we cant be the only assholess with sentience

Oh and this gem is an added bonus…dude is just Fn sick! I ■■■■■■ love this song and album!

man this guy makes it all look so easy! that was really badass drumming, guy knows whats up! fun vids to watch, goes to show how much hard work it takes to play death metal haha

Exactly! He isnt the guy on the albums but he is still amazing. He was their touring drummer for a couple years. This guy is one of hte top young drummers in the world right now.

This is the type of music Ive been playing my whole life. Ive played with several drummers of this caliber, but me personally its the guitar playing that I do best. I play drums but I cant play on this level, Im more on the Slayer, Megadeth drumming level LOL

A self-styled alien hunter believes he has spotted a UFO during a live feed from the International Space Station.

i remember reading this! dude, we are totally not alone lol 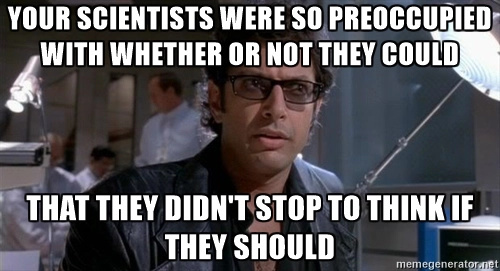 I would agree with this sentiment. As awesome as genetic creation creatures are. In fction it’s best to keep it that way.

Sometimes you have to stay out of daddy’s toolshed.

This is sort of a common sentiment, and it’s easy to find reinforcement from movies and film and even a few real life examples. But if we really want to “stay out of Daddy’s toolshed,” there’s a number of things we have to stop immediately and live (or die) with the consequences.

Know any diabetics? All modern insulin for treating diabetes comes from genetically engineered bacteria containing the human insulin gene. Previously diabetics had to use horse insulin, purified from horse blood. It didn’t work all that well, and was expensive to produce.

Antibiotics don’t just sprout from fungi in the form of pills.

You like apples? What about tomatoes or corn. Newsflash, forget modern biotechnology, none of these plants exist in “nature.” They are all the products of intense genetic manipulation by humans over millennia and don’t even remotely resemble their wild ancestors. Wheat, which we use to make bread and beer, is a tetraploid - meaning it has four sets of chromosomes from a (random) cross between two related species of grasses that was isolated by humans around 10-15,000 years ago. It’s a Frankenstein’s monster from thousands of years before the novel was written. None of the potatoes you eat were produced from seeds. Every banana you eat is a clone from a single plant. It’s fairly safe to say that nearly nothing you eat is “as god made it.”

I could go on for hours, but the point is if we really were to “stop playing god” our kids would die of malnutrition and diseases that we conquered a century ago.

when I think about it now, I guess that’s alright. I just remembered some foods we eat are genetic.

But so long as we don’t make Riptors to that degree I guess it’s fine.

Definitely drawing a line at maneating dinosaur death cyborgs we can agree on.

Political posts have no place in a public thread on these forums.