There is a problem with the fight challenges

the bars of the various challenges that each fighter, lock and stop growing, making it impossible to bring individual challenges to 220 for each fighter. It happened with omen and bar Rashakuken, now with Glacius and Shatter bar, locked at level 4.

discovered the problem with Glacius, not the “Shatter” but the “puddle Punch” to raise the bar, you should correct the name on bar in game 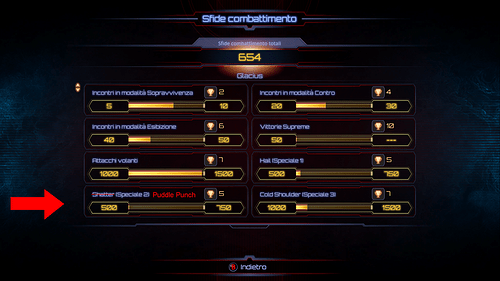 Yeah, I’ve also noticed that I’m not getting Fight Challenge completion notifications in match at all anymore. Was this a conscious decision? I’ll get one occasionally after a match, but it’s only ever when I’m about to level up. I don’t know if this has to do with the issue @Ravan86 describes above, but I really hope this gets fixed soon if it’s an error or put back the way it was before if it’s not.

While on the topic of fight challenges, I’ve been asking for this since season one and I’ll ask again because I’d still REALLY like to see this added, but is there any way the fight challenges screen (ie the one Ravan86 posted above) could have individual numbers of moves done?

In other words, if Glacius is between 1,000 Cold Shoulders and 1,500 Cold Shoulders, can I just get the number he actually has? Is it 1,027? Is it 1,281? Sometimes it’s nice when you’re close to completing a fight challenge to actually know how many moves you need so you can prioritize how many times you want to do this move or that move if you’re trying to level grind. Just put in parenthesis next to the move name or maybe to the left of the little trophy above each move that has the challenge level next to it on the right side.