Sugestion for a guest character

I was today at the gym when my battletoads vs double dragon music started to sound and then this idea came.

Since we already have Rash, why not include Jimmy from Double Dragon to the roster, i mean… MKX fans have alien vs predator, we could have our own Rare showdown here.

If Double Dragon characters were ever to be featured in this game, I think it would be unacceptable to not have them both. That’s why I don’t think it’ll be happening very soon.

But at the same time, it could be an older character. That would mean the guest characters would be 2 new and 2 old.

I’m still going with Master Chief for the Chief VS Arbiter fight though.

with double dragon i think licensing would be the biggest problem, but i kinda agree with ^ that for the rest of this season, probabaly no more guests till next season

I have this red lamp that blinks every time someone posts a thread about guest characters on this forum. And since I don’t have a life, nothing is holding me back to be here immediately!

HP Lovecraft when talking about his legacy and the work his written once said, “I have my X pieces, and my Y pieces, but where are my LOVECRAFT pieces?”

Its nice that Killer instinct gathered together all these tropes together when they were at the peak of their popularity but at some point you need to stop chasing after your idols and make something thats distinctively You.

Please, for the love of Celestia, no more guest characters.

it would be great if they incorporate Simon Belmont to the roster , i imagine the end of mira trailer with a teaser of simon chasing her . but that is an idea honestly i don’t want more guest caracters

That is precisely why we need a Lovecraftian character now.

Maybe someone will make a game for such characters and bouts.

Why does it have to be forced into killer instinct?

Although I prefer original characters over guests, I must admit there is, however, one particular guest character I would love to see in KI, and that’s SKORGE from Gears of War. 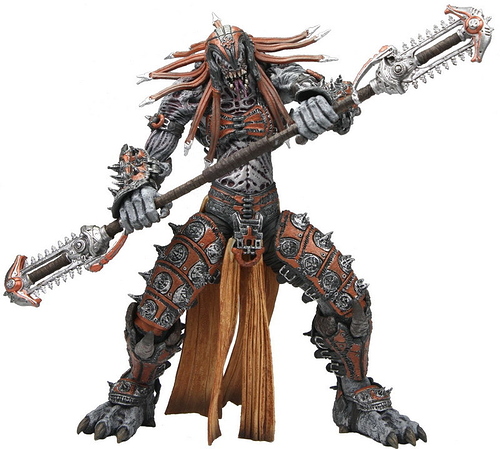 Skorge.jpg800×719 113 KB
I’ve never played GoW before and only got to know about this character after RAAM was announced for KI. It’s a shame I also forgot to mention him in the character survey, as I think his design and weapon would fit perfectly into KI.
ShatterSpasm July 12, 2016, 7:21pm #13

I know it’s not the most popular opinion on the forum but I would not be adverse to Scorpion from Mortal Kombat being included. Would be interesting to see a take on him by IG. I’m assuming a lot of chain spearing n’ such.

Again not a very popular opinion among most people… and I expect to get at least one teabagging (clambagging for the women?) for bringing it up…

So I say BRING IT ON! GIMME YOUR BAGS FULL OF TEA! RRRAAAAAHHHHHH!!!

Maybe they can just fund an injustice - style game for halo & gears of war characters.
Somehow I feel this ( placing them in KI ) is a test for an upcoming multi-guest fighting game like smash bros or marvel vs capcom

Rather than having Scorpion as a guest, I’d prefer a full “MK vs KI” game. Both companies seem to enjoy the idea. Who knows what the future holds?