This issue occurs every time I start/quit the game, it even says that it is syncing my data when I hit ranked matchmaking, but its always set back to match 1 of qualifier matches the next time I start the game. Reinstalling won’t fix it and I have no idea for another way of going about it. Anyone else having this issue, or even a solution? It’s driving me insane…

EDIT: I found the fix to this. You can still block everything in the privacy settings, but everyone having this issue is probably using Spybot Anti-Beacon. You can block everything except ONE specific thing called “Telemetry Services”, after that youre good!

It’s a visual glitch as of the last update, meaning your rank is still what it is supposed to be, you just can’t see it. I know this, because it happened to me yesterday (a lot), but would fix itself after a while of playing (it would revert from qualifer back to my original killer rank that I had earned). There are 2 unfortunate side-effects to this, however: 1) everyone else can see the same visual glitch, so you may think you’re fighting a qualifier when you’re actually fighting a killer, and 2) there is no fix for it yet, so all you can do is wait it out until the next update (hopefully) fixes it.

It cant be that way, because I am bronze and I still get matched against silver/gold/killer players… Also, Xbox Live doesn’t track my achievements at all. I hate Microsoft by now!

That’s a normal thing. The game searches for those of similar skill/rank/tier, but if it can’t find any, it expands its search out to other tiers that may be lower or higher than yours… It also doesn’t help that the game has been out for a long time and many players have already ranked up and/or learned how to properly play the game - that’ll work against you, but as long as you’re persistent, things should even out and get better for you. If you’re still learning, I highly recommend you visit ki.infil.net, as it’s the best guide online for this game - trust me, when I say that you won’t regret doing so.

As for the other stuff, sometimes achievements are delayed when you earn them. In other words, you did actually earn it, it just won’t show up until later. In my experience, however, this is generally a rare thing. It it’s happening a lot, I would report it to Xbox Live support.

This is just my personal opinion, but I think MS, overall, is a great company! It’s because of them that I have 300+ video games and have only paid for roughly 1/2 of them (thanks to the Free Games with Gold promotion, backwards compatible titles, free to play games, EA Access, Deals with Gold, etc.).

so I played the placement matches, got bronze, then within bronze it showed im qualifiers again, then I ranked gold after another ten matches… wtf is going on

So this guy on reddit said its related to the Windows 10 privacy settings. This is insane, if that’s true, I disabled all of them, because I don’t want the official Microsoft keylogger running on my computer… Didn’t find out which one yet though, so still no fix!

I found the fix to this. You can still block everything in the privacy settings, but everyone having this issue is using Spybot Anti-Beacon. You can block everything except ONE specific thing called “Telemetry Services”, after that youre good!

How did you enabled telemetry?

Unblock everything (via the Undo button), go to Show Options, and ensure that Telemetry Services isn’t checked, then Immunize again.

All of the options I have described at near the bottom of the UI. 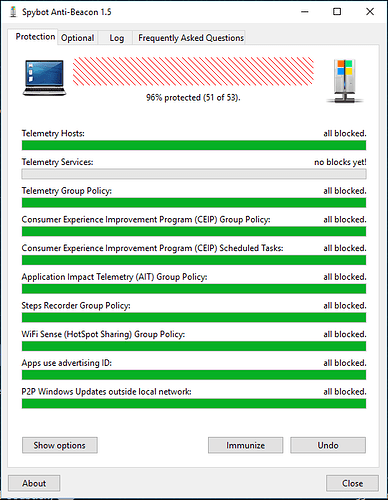 Sorry, you’ll have to do your own investigation to figure out how to unblock KI’s Ranked progression.

Telemetry Services”, after that youre good!

Thanks for updating with this info!
I would not be surprised if shadows were not working for you either with telemetry blocked.