So now that Tusk is confrimed, let me be the first to say it

I’d like Tusk’s story to be about him being a great warrior of the king (from the past) that was somehow transported via a portal to the future (perhaps by a Kan-Ra curse, maybe?). I want him to have a Conan outfit, a lumberjack outfit, and maybe even a Mad Max outfit.

Tusk was confirmed a looooong time ago, though he does need some good accessory sets. Like Conan or something.

He was rumored, but wasn’t confirmed until last night.

Pretty sure he was.

Adam has said if season 3 happened he would be included ages ago.

If I remember correctly from what Adam said last year, he was going to be an outdoor survival man since Timetravel was retconned in the reboot and Barbarians are archaic.

Conan outfit is almost as guaranteed as soon as he was anmounced, its a fitting costumed for a bulky male character like that. I’d kinda like and Andre The Giant outfit too, that may be nice with the retro?

Yep, he was said to be an “outdoor survivor” guy. 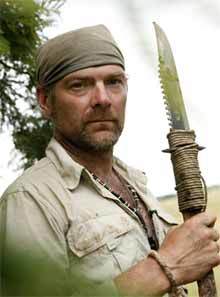 I’m aware that he was mentioned to be an “outdoor survival” type. However, that was never confirmed - they were just “looking into it.” Besides, he could still introduce the concept of time travel in his storyline (but it wouldn’t be a central aspect of the story like in the past - it’d just happen and be left at that) and have lived among us for some time, still allowing for the “survival” aspect, and his adjustment to modern times.

Tusk the Barbarian or Tusk the Outsdoor Survivalist. There, I said them now

We need one dark haired variety, resembling Conan ! He is after all, the inspiration!

I just need my Greatsword.

If he wields a foil sword and practices fencing because fencing is an Olympic sport and slicing up your opponent isn’t. Now that would suc…

I posted something on the S2 forums proposing that Tusk can remain an “ancient barbarian” if he is drawn through the portal that Gargos and his minions will be coming through - the one Kan-ra is ■■■■■■■ around with. This would allow time travel without really being time travel - he’s been held in stasis for eons so time has passed, but he’s still a warrior in his prime.

An alternative would be to simply add modern gladiatorial combat as a sport in the KI universe. That removes time travel, allows him to be burly and trained in greatsword combat, and could open up costume ideas like Tron-ish glowing battle armor or a sword with plasma edges.

While they clearly have the design and everything already done, I think a Mad-Max-style anarchist (or villain) would fit him. KI is about tropes and action figures and that’s still super hot right now.

How about Highlander! Connor Macleod! There can be only one!

Tusk would be immortal who lived for centuries. He can be from Babylon who recently moved to Scotland/Ireland.

All news sites are reporting that he’s confirmed as of yesterday, so

“Confirmed” or not, everyone here knew he was going to be in season 3 as of MONTHS ago straight from the devs themselves.

Another way is just saying he lives in a society isolated from the rest of the world so in turb still a barbarion but in moder times.

For all you Tusk fans I want to help you all learn how to get aquainted with Tusk’s new look so here’s my advice:

When the modern design is released looked through the features and see what he shares in common with his older look.