On the Season 2 forums, I had created a post about my concept for what I believe to be a very unique character. This topic will be more fleshed out once the old forums are up and I can copy the information from there, as there was a lot of brainstorming that went on with the community, and I honestly don’t remember enough of it.

This character would be a medusa, complete with snakes in place of hair, stone-gaze effects or attacks, and an undulating snake tail instead of legs. I decided on “Slither” as a name, as it describes her well, and I could easily hear Mike’s voice calling out her name on the character select screen.

Slither would fit into the KI lore pretty easily, as KI is a series which incorporates various monsters and mythological beings. In my imagined background, Slither is part of a steadily declining race of jungle dwellers, who have been nearly hunted to extinction by the Nightguard. Her motivation for fighting is to provide a home, safety and prosperity for her race, placing her in a very neutral role.

Information from the old forums includes discussion of her stage, look, moveset and abilities, and I will copy those over as soon as possible. I just wanted to place this on the new forums ASAP so that I have a placeholder, and to generate any discussion anyone might be interested in having about Slither!

I like the idea of a Gorgon character but the only issue I have is that Gorgons were known to turn anyone who looked at their face to stone, how would that work in a fighting game if no one can look at the Gorgon to begin with since it would be no contest…

The information we discussed in the old forums focused on either giving her a single stun-like special or ender which would be her ‘stone gaze,’ or that her Instinct mode would slow down the opponent’s movement and attacks, putting a stone/grey texture over the opponent to show them fighting off the effects of her gaze.

The mythology doesn’t have to be followed exactly, and besides, these are supernaturally potent characters we’re talking about, so it’s not out of the question to think they can resist total petrification.

I hear you man, I suppose you make a good point, besides not all Nosferatu are immune to light, hover, phase out throughtout all Vampire stories and lores? Or I could be wrong? I see what you are trying to say though since throughout time there are little adjustments or acceptions

I’ve always loved this concept. It makes me think of Medusa from Clash of the Titans. I would love a character like that. And just imagine how quick she will be slithering around like an oiled up Hisako, lol! And OMG, check this for the command grab, she wraps her tail around the opponent and flings them into the fray.

A command grab like that was actually discussed in the old forums, in a few different forms. I can’t remember very many non-bipedal characters in fighting games, so I think her snakelike lower body would be very unique in general.

My idea for her combo trait, or certain enders, would inflict a damage-over-time status on the opponent, causing them to lose a small amount of health which could not be prevented. This would give Slither the option of going for small combos with the ‘venom’ enders, or the more traditional combo structure. These enders could even be specific to certain power levels, which would either determine how much health would be lost, or provide easy break points for the defender, and a successful Combo Breaker would remove any existing venom.

Excellent Idea!!! I really love the concept.I hope that we see a Medusa and Vampire character trope during Season 3.

Just do what they did in Smite and have her wear a mask that covers her face, and when she pops instinct she takes it off to activate a frame trap.

Someone had posted a great GIF from Clash of The Titans in the old thread, showing Medusa’s face changing from beautiful to near-demonic, and the idea of a mask was also discussed. Personally I don’t like the mask idea at all, we already have some masked characters, and I think her face should be visible and expressive.

when she pops instinct she takes it off to activate a frame trap.

Haha, I like frame advantage as much as the next guy, but is +X all you want from your instinct?

I guess she could have something like Wulf’s feral cancels, except that each cancel freezes the opponent briefly rather than cancelling out of her own recovery…

Anyway, another option is to just go the Naga route instead of making a mythologically faithful Gorgon.

Actually, just had an idea for a guest character! 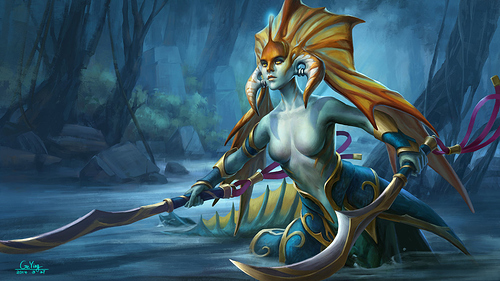 There shouldn’t be anything to do with a mask or stone gaze because trust me, anyone who had that power would abuse it and not wear a mask to give an advantage or give a fair chance to the opponent. It should just be a gorgon minus the stone gaze attribute for more sound reasoning.

Sony’s God of War Ascension really had a nice model of Gorgon character. Oops! I had to cover her ■■■■■.

If a gorgon character make it in season 3 please name her Oroboros or something like that.
Also Aganos would have some advantage above her since he’s golem with a body made of rock.

Why do you think Oroboros would be a better name for a snake-like character than Slither? I’m curious.

I just like how the name sounds. But Slither is a good name too. The curious thing about the Slither name is how it reminds me scyther the pokemon.

Why are you bothering to name her? We know that Isgreen is going to go to town on her backstory, including naming etymology and whatnot.

Because the name came to my mind along with my other ideas about what a medusa/gorgon based character could be, and I felt the name was fitting.

Considering this is nothing more than a fan idea, and we haven’t had any kind of verified silhouettes or characters other than the fact that Kim Wu and Tusk will be returning, naming the character seems perfectly appropriate. Who knows? Maybe if a character like this is one that IG has been working on or considering, they might end up liking “Slither” as a name.

The problem I see with this idea is the medieval/mythological theme. The devs have expressed a lack of interest in the time travel idea, (which becomes a problem for Tusk.)
Even if she’s somehow modernized, what’s her story? Yet another rejected Ultratech experiment? With a bow and arrow?

As far as the name Slither, it’s too plain and it’s a verb not a name. Slithe or Slitheena or Lucretia, Jizelle, Lilith, Leelith, Lorelei, Hemlock, etc. would all be fitting snake woman names in my opinion.

I could picture such a character in KI. Just a matter of plausible background.

Just keep her away from the Belmonts…