I mean… cmon! Including jago on the package is an excuse to inflate the price of the bundle, and now you increase the price again? The bundle is basically shago and useless crap, so you are asking 13.45 for 1 character? Thats an abuse

Wait, what? What region, give us a screenshot… 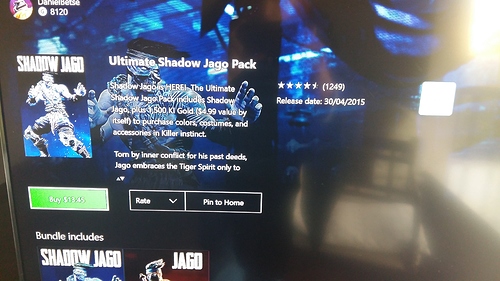 I noticed your date display - are you in EU/UK?

Im from Chile, i have the location set up to US because i hate the spanish dub from halo 5

So it’s probably conversion corrected for you in that case.

I dont see it being the case, everything ive bought on this game has no changes from the original US prices

Hmm…that is something strange.

Relax man…no one is abusing anyone. If you speak to customer service or Rukari politely…Im sure they will figure it out for you.

How much is it supposed to be?

So your worried about another 3$? Its not that big of a deal… Just buy him and be happy… hell we paid more than that to have him created so whats the problem? You are still getting it cheaper than we did when we paid full price and then waited 5 months.

Nothing is too much for KI …IMO…Buy SHago and have fun. Complaining isnt going to bring the price down.

Looking in to it - just so you’re aware.

This is actually a problem simply because the price is higher than it should be. We really shouldn’t make light of it, rather just calm down and wait for it to be fixed.

Who said I was making light of it? Again complaining on a public forum doesn’t bring the price down. Speaking to customer service its the best option.

Who said I was making light of it?

Saying “an extra $3 is not a big deal, just buy it” is not the response that should be given. It should be “wait for it to be fixed since it’s clearly wrong.”

Perhaps “making light of it” was the wrong phrase.

Kid, I don’t need you to give me advice on how to words statements. Move on… go help him if you see fit. But arguing with me is going to get you nowhere.

Its not a big deal, I paid well over 13$ for Shago and I already had him. But complaining instead of calling MS customer service is a waste of time.

Kid, I don’t need you to give me advice on how to words statements.

Damn, sorry if I offended you. Just trying to be helpful.

Tbh sonicdolphin was being quite polite, but back to topic.

Today i was like: nvm i will buy this overpriced character even if he is kidnapped inside the must useless bundle ever, and then the price increases… lololol

At least you saved me from joining the scrubby shago army